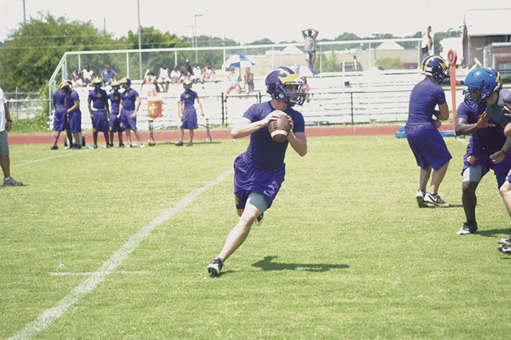 The Sweet Water Bulldogs paid a visit to Demopolis Monday, taking part in an 11-on-11 scrimmage that allowed both coaching staffs to get a better assessment of exactly where their respective teams are heading into the start of practice next week.

The 11-on-11 format provides run-first teams like Sweet Water a little more aide than do 7-on-7 drills simply because of the presence of the offensive line.

“We get to block,” Sweet Water head coach Stacy Luker said. “We get to work on our total offensive package against a different look. Defensively, sort of the same thing. It also allows all the coaches, for us and Demopolis, to stop and coach (the players) while the drill is going on.”

Sweet Water has spent much of the summer seeking to develop depth during its workouts. The Bulldogs are coming off a season in which they lost in the third round of the state playoffs to Loachapoka. But the greater loss came in May when the program lost a great deal of experience to graduation.

“We’re just looking for depth,” Luker said. “That’s the main thing. We don’t have the depth we’ve had in the past. We’re just trying to get some kids ready to play.”

In preparation for the official start of practice next week, the Bulldogs have spent much of the last month conditioning.

“We’ve worked mostly in the weight room,” Luker said. “We’ve been running and trying to get ready physically. We’ve taken the last three weeks to do what we did (Monday) with Demopolis and we did the same thing Donoho. By the time next week rolls around, we will have had 12 workouts.”

Monday provided Luker his last look at the Bulldogs against outside competition until the squad suits up for an Aug. 20 jamboree date at Demopolis.

One of the bright spots of the scrimmage for the Bulldogs was sophomore starting quarterback Brett Davis. Thrust into the starting role just before the beginning of his freshman season, Davis had his share of highs and lows during the 2009 campaign. With 2010’s opening kickoff looming, Davis displayed a firm grasp of the offense and more confidence as he executed it.

“He’s grown up,” Luker said. “There is a whole lot of difference between a ninth grade starter and a 10th grade starter. He’s matured physically and emotionally.”