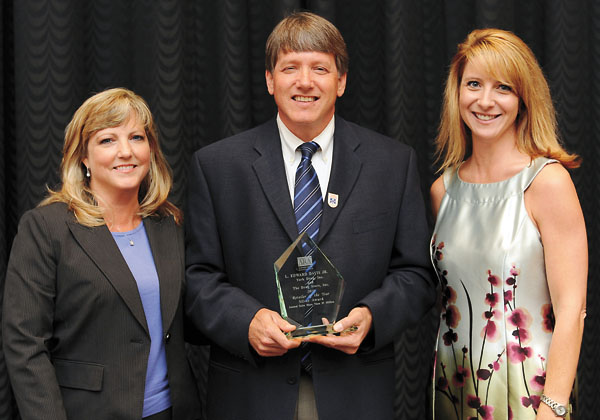 Jennifer James (right), executive director of the Sumter County Chamber of Commerce, poses with Retailer of the Year Eddie Davis and his wife, Susan, after the 2010 Retail Day Luncheon at the Cahaba Grand Conference Center in Birmingham.

BIRMINGHAM – The Alabama Retail Association (ARA) in cooperation with the University of Alabama at Birmingham School of Business this week recognized 12 outstanding Alabama retailers representing 10 retail businesses as “Retailers of the Year.” The presentations were made at the Cahaba Grand Conference Center in Birmingham during the 2010 Retail Day Luncheon. This marked the 11th presentation of the Retailer of the Year Awards since 1999.
Eddie Davis, president and pharmacist for York Drug Inc. in York and The Drug Store Inc. in Livingston, won the Silver Award in the largest of three sales categories. He also owns York Drug Home Medical in Demopolis and Fayette.
Kelley Jordan, former executive director of the Sumter County Chamber of Commerce, nominated Davis for this prestigious award.
“With businesses closing right and left in our rural area, Eddie has found the means to keep his businesses alive, serving two locations in Sumter County,” Jordan wrote in her nomination of Davis.
Davis said sales are up at both stores with York Drug’s major growth in home medical equipment sales, and The Drug Store’s growth in prescription sales.  He describes the past year as a time to invest in the businesses.
Both stores added robotics for the pharmacy department.
York Drug has two pharmacies under one roof with separate physical addresses: a retail pharmacy and a long-term care (LTC) pharmacy for nursing homes.
“The dispensing robot for the LTC pharmacy has positioned us to be more aggressive in approaching new business,” he said.
Davis’ biggest investment has been in his staff of 60. He’s created a management improvement system, which involves monthly meetings for the 12 managers who work at the two stores with a long-term goal of improving management abilities.
“The system we are learning and utilizing is one I have developed myself,” he said. “Therefore, I have a huge amount of ownership…and I am seeing that same ownership and enthusiasm spread to our managers.”
Both stores also have initiated a preferred shopper, or loyalty program, in the past year operated through the point-of-sale system.
Davis also is a pharmacy student preceptor for Samford and Auburn universities. “I usually have two new students each month,” he said. “Of course, pharmacy is the main focus, but I also stress the merits of independent ownership and the excitement associated with retail sales.”
Davis is most proud of his businesses’ service to the elderly.
“When the Medicare Part D insurance card was introduced in 2006, community pharmacists were at the forefront making it all work…We also do a monthly diabetic support group meeting for our elderly customers.  The meetings are always rewarding and encouraging,” he said.
Davis draws inspiration from his senior partner, Johnny Bell.
“Johnny created the culture of excellence that I stepped into more than 20 years ago, and I have simply built on what he started.  His insight, mentoring and vision have always kept us on course and pushing forward to be the best we can be,” Davis said.