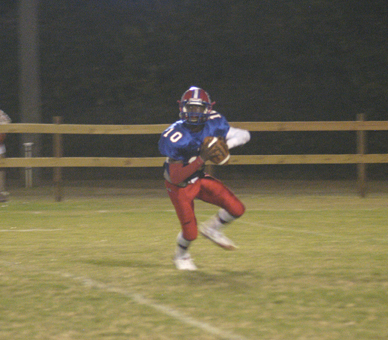 Robinson, who amassed 381 all-purpose yards on the evening, announced his presence to the Demons on the first series of the game when he picked off a pass at his own 19 yard line to halt a McIntosh march. Five plays later, he finished what he started when he bolted 60 yards for a touchdown run. The Gerald Bruno extra point made it 7-0 Linden.

After McIntosh struggled to move the ball, a bad snap on a punt attempt made matters worse. Linden’s Demetrius Craig recovered the loose ball at the McIntosh 4. Kendarius Fritts kept the drive at one play with a four-yard touchdown run.

On its next possession, Linden covered 64 yards in eight plays, getting a 22-yard touchdown run from Fritts to culminate its longest possession of the night. Bruno added the two-point conversion run to put Linden up 21-0. Fritts did not touch the ball in the second half, ending his night with 50 yards rushing and two scores on six carries.

After the Linden defense put together another stifling effort, Robinson took a Demon punt at his own 10 and sprinted 76 yards to the McIntosh 14 after teammate Bruno sprung by laying out to would-be tacklers with a single block. He then found Bruno on the left side for a 13-yard gain before punching it in himself on a one-yard keeper. Robinson then connected with Jorian Ravizee on a two-point conversion pass to put Linden up 29-0.

Hampered by blocking infractions during its first drive of the second half, Linden turned to the air. On the fourth play of the possession, Robinson dropped back and found tight end Terris Lewis all alone for a 56-yard catch-and-run that put the Patriots up 35-0.

Starting at his own 18 on the Pats’ next drive, Robinson wasted little time in finding the end zone once again. On the only play of the possession, he stepped back and hurled a bomb to Bruno, who angled his way through a pair of tacklers to finish off the 82-yard touchdown pass. Bruno then added the extra point to put Linden up 42-0.

“Anthony is doing a good job of stepping up,” Williams said. “When his number is called, he knows what to do.”

Robinson’s number was called again on the Pats’ next possession. Robinson led the Patriots 68 yards on a five-play drive that saw him complete four passes. The final play of the march saw Robinson hit Najee Bright on a slant route before the wideout shook two tacklers and darted into the end zone for the 29-yard scoring play. Bruno added the bonus point to put Linden up 49-0.

On the ensuing possession McIntosh ran a reverse pass that saw the throw come out of the Demons’ own end zone. Linebacker Chris Rogers displayed his athleticism by leaping into the air and making a one-handed interception while falling backward. His play gave Linden the ball at the McIntosh 13.

Robinson popped out from under center and hit Julian Little for an eight-yard gain before finishing off the drive with a five-yard toss to Bruno, who finished the game with five catches for 122 yards and a pair of scores.

Linden’s final score came after McIntosh put points on the board with a 40-yard touchdown pass against the Patriots’ reserves. The Patriot backups responded quickly when sophomore Jamal Lewis scampered 67 yards for the final score of the game. Linden’s defense also got big plays from its second unit as freshman Terrance Sanders and eighth-grader Davontae Knox each recovered fumbles.

“I’ll be anxious to see how we played up front,” Williams said following the game. “I didn’t think our intensity was where it needed to be in the first half. We had some things work well for us in the second half.”

Robinson did most of his damage in the second half, throwing for 219 yards and four touchdowns in the third quarter alone. An all-state performer as a freshman, Robinson finished his night 10-for-12 passing for 244 yards and four touchdowns, complementing those numbers with two carries for 61 yards and a pair of end zone visits. He also completed his only two-point conversion throw.

Linden plays again next Thursday when it travels to face region foe Coffeeville.