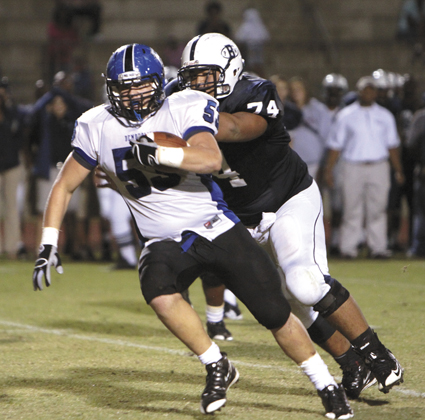 Demopolis (4-2, 4-0) has a chance to all but clinch its first region championship in Class 5A Friday night if it can down a once-beaten Greenville team.

“They’ve got an excellent football program that has proven it is one of the top programs in Alabama,” Demopolis High head coach Tom Causey said of Greenville.

The visiting Tigers will roll into Demopolis with a 5-1 record, having suffered its only loss to an undefeated Class 6A Wetumpka team. Greenville also enters the contest averaging 38.5 points per game thanks in large part to sophomore quarterback Kenterrion Riley.

“They have got an extremely explosive athlete at quarterback,” Causey said. “Unbelievable athlete. Throws the ball extremely well.”

Demopolis has developed a familiarity with Greenville quarterbacks in recent years, having worked to limit former starter Ryan Smith for three match-ups over the last two seasons.

“They haven’t changed their system for Kent Riley,” Causey said. “He just fits what they do. The only difference is where Smith was going to get you 14 to 18 yards, if you don’t put your hands on Riley, he’ll get 40 to 80.”

If Demopolis’ defense can continue to build on the improvements it made a week ago against Paul Bryant, it will have a chance to keep Greenville in check.

“We were hitting our marks better Friday night than we were the week before,” Causey said of his defense’s improvement.

“You can’t be out of position against a bunch like (Greenville).”

Offensively, the likely be called upon to perform better than it did when it suffered a regular season loss to Greenville last season. Since that time, the line reasserted itself during the second round of the state playoffs when running back DaMarcus James carried the ball 43 times.

Given the success of the DHS senior stalwart a season ago, it may be even more important that the home Tigers get production out of other skill players like A-backs James Wilson and Jerry Campbell and quarterback Ben Pettus.

“They are big every week,” Causey said of the DHS skill players. “We’ve got to take what the defense gives us no matter who it is.”