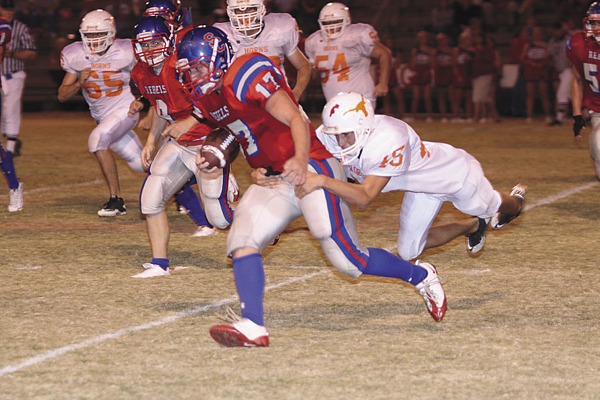 LINDEN — The Longhorns knew entering the season that 2010 would be a tough one. Numbers are down. The competition is tough. What they did not count on was the long line of injuries they would ultimately incur.

The already dwindling roster has seen the loss of two-way mainstays Alan Flowers, Hunter Crouch and Rabe Hale among others. But, still, the Longhorns have persevered. Thursday night they will look for their third victory of the season when they host rival Southern Academy.

“We play them in every sport. We play them in junior high as well as high school,” Marengo Academy head coach Robby James said. “It kind of creates a rivalry.”

James said the no matter how long the roster has gotten on his team’s injury list, Thursday night’s opponent will command the best from the Longhorns.

“The kind of team and program they’ve had the last several years, it lets you know that you’ve got to get up to play them,” James said.

While the Longhorns have limped through the first seven games of the season, Southern’s fortunes have been little better as it has struggled for stretches.

“They are a young team,” James said. “They’ve been up and down, but they’re coming off a big win against Escambia. I’m sure they are still in the playoff hunt. They are going to come in ready. I hope we can bow our necks.”

While the injuries have been a problem for the Longhorns, James said he has seen bright spots emerge from the difficulty. Mainly, he has seen senior Matt Etheridge elevate his game.

“It’ll be great to get some of our guys back, then we’ll be able to spread the ball around and get some of the attention off of him,” James said. “He’s done well, truly just kind of taking the bulk of everything while Rabe (Hale) has been out.”

Even with Etheridge’s production, Marengo suffered the loss last week. But James indicated the loss was less about who was not on the field for the Longhorns and more about what MA did when it was on the field.

“Our biggest problem the other night was turnovers,” he said. “We fumbled five times and had two interceptions. That doesn’t add up too good.”

Downing a hungry Southern team Thursday night at Linden Athletic Field will require better ball security from the Longhorns. That contest kicks off at 7 p.m.