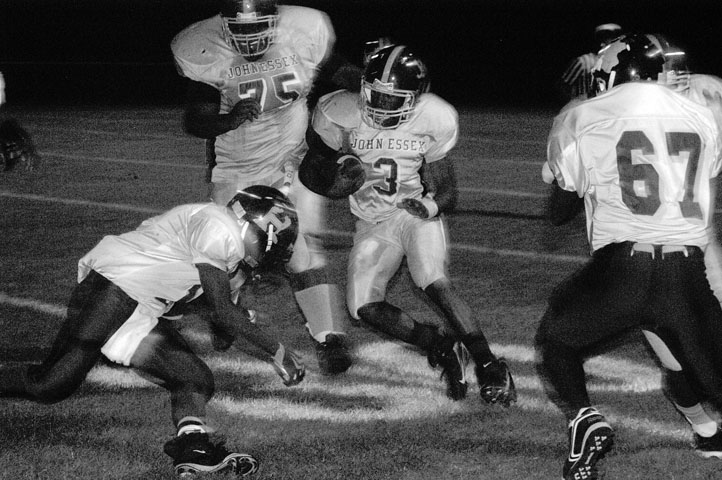 John Essex (5-5, 4-4) closed out its regular season on a high note Thursday night, thrashing the visiting R.C. Hatch Bobcats 44-12. Unfortunately for the Hornets, who avoided a losing season for the first time since 2005, their playoff hopes were dashed Friday night when Keith downed Marengo 34-14 to clinch a tiebreaker for the fourth and final seed in Class 1A, Region 3. “First of all, I’m disappointed for the kids,” first-year Hornets head coach Jerome Antone said. “They fought hard. They played like champions. We grew together from the start of summer practices. I believe it is something we can build on.” The game was hardly in question after the opening kickoff as Anthony McIntosh found his favorite target, senior receiver A.J. Bennett, for a 21-yard touchdown toss on the Hornet’s first offensive play. John Essex, already with an early 8-point lead, would steamroll the hapless Bobcats for the remainder of the night. The Hornets recovered the ensuing onside kick and two plays later Denzell Charleston ran 21 yards for the score, giving the Hornets a 16-0 lead With R.C. Hatch driving, Terry Fountain intercepted a pass and set the Hornets offense back up near mid-field. Cedric Cooks helped John Essex take advantage of the opportunity on a 22-yard touchdown run and gave the Hornets a 24-0 lead at the half. “They played (Thursday) night like they were just so focused,” Antone said of his players. “They were so close they could taste it. My heart goes out to my seniors.” The Hornets’ defensive unit dealt the Bobcats fits all night, and early in the third quarter Devonte Richardson scooped up a Hatch fumble and returned it 65 yards for the score, putting John Essex up 30-0. The Bobcats would finally answer with their first score of the night, a 40-yard bomb late in the third. The Hornets would answer with another score midway through the fourth when McIntosh found a wide-open DeMarkez Dillingham on an 11-yard strike. The Bobcats then struck with another long touchdown toss late in the fourth. As the fourth quarter wound down, and with the Bobcats nearing the John Essex red zone, Bennett intercepted a pass in the end zone and set the home-standing Hornets up on their 20-yard line. Two plays later Bennett would finish what he started with a 62-yard touchdown run, sealing the 44-12 win. R.C. Hatch mounted one final drive late in the fourth but it came to an abrupt end when Korey Jones pounced on a Bobcat fumble. Charleston led the Hornets’ rushing attack with 129 yards on 15 carries. Bennett led the receiving corps with 58 yards on three catches and added 77 yards on the ground. McIntosh finished the night 5-for-6 with 49 yards passing. The Hornet defense allowed only 173 total yards Thursday night, with 137 yards coming off three long pass plays.