Demopolis downed in second round 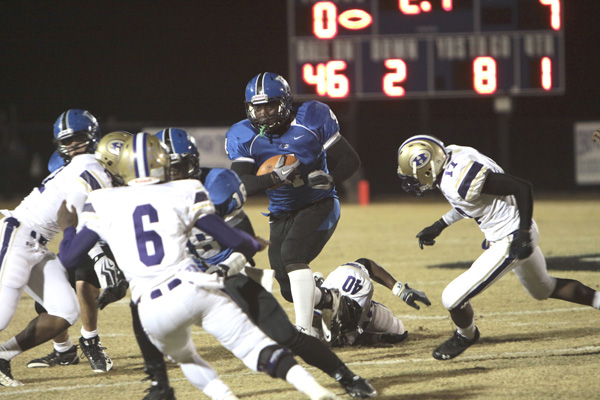 Demopolis’ bid for a second consecutive Class 5A state title ended in the second round Friday night when Hueytown toppled the Tigers 28-14.

Demopolis (8-4), which never led in the game, found itself behind the eight-ball early in the when the Gophers took the opening possession 65 yards on 11 plays to take a 7-0 lead and run the first quarter clock all the way down to the 6:48 mark.

Demopolis answered with a 12-play drive of its own but squandered its opportunity to score when the possession stalled at the Gopher 41. Three plays later Pierre Thomas gave his team another chance to even the score when he stripped the ball from the arms of Jameis Winston and recovered the miscue himself at the HHS 48. Demopolis used nine plays but never got beyond the Hueytown 36, again having to punt the ball away.

“We couldn’t stay on the field on offense on third down,” Causey said. “We got ourselves into long down and distance. Those are hard to convert against a defense as good as this one.”

The Demopolis defense forced another stop on the Gophers’ ensuing possession, halting a 12-play march at its own 20. The Tigers finally capitalized on an opportunity, going 80 yards on seven plays on a drive that culminated with a game-tying eight-yard touchdown run by DaMarcus James. The senior stalwart amassed 74 yards on five carries during the drive, which ended with 2:36 to go in second quarter.

Demopolis appeared poised to stop Hueytown’s late first-half push when it tackled Winston at the DHS 2 with five second to go. The Gophers hustled to the line and got the snap off, allowing Winston to fire in a two-yard touchdown pass to put his team up 14-7 at the intermission.

Hueytown, who finished the night with 419 yards of total offense, later used another possession to stretch its lead to 21-7 when running back Ronald Stewart bolted in from 22 yards out with 2:22 to play in the third quarter.

After a quick Demopolis possession, the Gophers upped the lead to 28-7 with 11:36 to go in the game when Winston dashed for a 19-yard touchdown.

Demopolis scored its final points of the season on another seven-play, 80-yard drive. This one ended when Pettus hit James Wilson for a 14-yard touchdown pass, allowing Cameron Fendley to convert the extra point to set the score at its final mark. Deonte Washington ended the night with 16 tackles to lead the defense while senior Reid Barkley finished with nine.

“They’ve won a lot of ball games and put us back on the map,” Causey said of the departing seniors, who were freshmen during his first season as the Demopolis head coach.