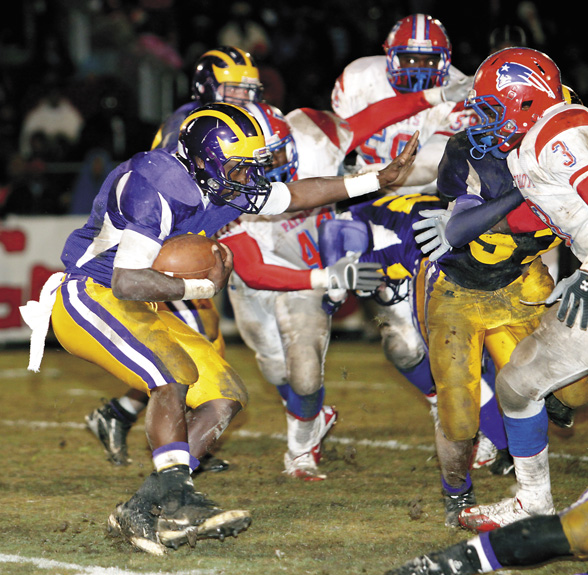 SWEET WATER — The Bulldogs once again find themselves headed to the Class 1A state championship game after downing Linden 20-6 Friday night. Sweet Water cashed in on a pair of Patriot special teams miscues to account for the difference in the contest.

“We gave them some short fields to work with,” Linden head coach Andro Williams said. “Special teams plays got us.”

The first costly kicking game blunder came late in the opening quarter when a snap sailed over the head and through the hands of the Linden punter.

The Patriot punter ran down the ball and attempted to punt it away amid a crowd of Bulldogs. Sweet Water promptly blocked the effort, recovering the ball at the Linden 8.

Three plays later, Michael Thompson punched the ball in from two yards out to put Sweet Water up with 18.9 seconds to play in the first quarter.

The second mistake happened midway through the third quarter when Linden’s punter again found himself surrounded by purple jerseys. Rather than trying to kick the ball away, he fired an incomplete pass that gave the Bulldogs possession at the Patriot 21.

Linden found its stride on the ensuing possession, marching 80 yards on 12 plays.

The drive featured seven Kendarius Fritts runs, highlighted by a 38-yard sprint that put Linden inside the Bulldogs 5.

Quarterback Anthony Robinson finished the effort with a four-yard touchdown run, cutting the deficit to 13-6 with 1:57 remaining in the third.

Linden appeared poised to tie the game early in the fourth when it took over at the Sweet Water 36 after a Bulldog punt netted only seven yards. But after four plays, the Patriots were a chain link short of picking up a first down, handing the ball back with just over 10 minutes to play in the game.

Sweet Water proceeded to play keep away with an 11-play drive the covered 74 yards and milked the game clock down to the 5:53 mark before Chris Landrum scored from a yard out on a pivotal fourth down play.

The point after kick left the Bulldogs up by two scores.

“We had to run the ball. We didn’t win one athletic battle on this field (Friday night),” Luker said.

“We knew we had to grind on them.”

Linden’s final push ended when Desmond Bouler put himself on the receiving end of a Patriot pass with 5:27 to play, icing the victory and allowing Sweet Water to run out the clock.

The win puts Sweet Water in the state championship game during a season in which their highest profile player, Chris Landrum, missed nearly all of the regular season and some of the playoffs with an injury. Additionally, the Bulldogs endured intervals without a number of other players.

“The character and resiliency of our football team all year long is unbelievable,” Luker said. “It’s one of the best jobs that our kids have done. Their resiliency and their character has been above reproach.”

For Linden (12-2), the loss ends a campaign in which the Patriots were unblemished against every opponent not named Sweet Water.

It also caps the high school careers of a handful of key seniors including Gerald Bruno, Najee Bright and Fritts, the 2009 Class 1A Back of the Year.

“I am very, very proud of what they’ve done at Linden High School the last three or four years,” Williams said of his departing seniors.

“They set the foundation for where we’re at. I’m just real proud of their efforts and what they’ve done for us.”

Fritts ended the night with 17 carries for 118 yards to lead the Linden offense.

Sweet Water did not have a 100-yard rusher, but did get significant rushing contributions from Landrum, Thompson, Davis, Deon Waters and Terrence Sewell. The Bulldogs also got defensive help from Linc Luker, who intercepted a pass in the first half.

Unbeaten against Class 1A foes in 2010, Sweet Water (11-3) will play R.A. Hubbard (13-1) in the state finals at 3 p.m. Thursday in Auburn’s Jordan-Hare Stadium. Sweet Water has allowed only 47 points in 11 games against Class 1A opponents this season. Hubbard earned its bid to the finals with a 14-0 win over Parrish Friday. Hubbard’s lone loss of the season came against Class 4A North Jackson in week five.

Two of SWHS’ three losses have come to Thomasville (4A) and Leroy (2A), who are each headed for Super Six competition.