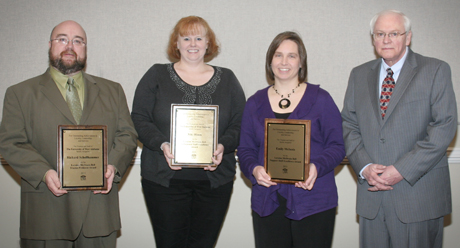 LIVINGSTON – The University of West Alabama recognized three longtime employees with the annual Loraine McIlwain Bell Trustee Awards at Wednesday’s board of trustees meeting. Emily McInnis, Niki Hines and Dr. Richard Shelhammer were selected by their peers for the prestigious campus awards.

McInnis’ responsibilities include Web registration, eAdvising, Web grading and degree audit in the Office of the Registrar. Her colleagues describe her as hard working, dedicated and attentive to detail. She and husband Chris have three children, Tiffany, Tyler and Rachel. They reside in Demopolis.

Senior Financial Aid Officer Niki Hines received the Professional Staff Excellence Award. She joined the Office of Financial Aid in 1998, and in 2002, she was appointed to her current position.

Colleagues call Hines “the backbone of the department,” as she is the key person charged with managing all institutional and outside scholarships and with configuring software to ensure the University complies with constantly changing federal regulations. She lives in York with husband Eddie Mac and daughter Madison.

Dr. Richard Schellhammer, professor of history in the Department of History and Social Sciences, is the McIlwain Bell Trustee Professor. The senior faculty member in the history program, he joined the University in 1994.

Schellhammer has presented numerous papers at professional conferences and has published scholarly articles in many journals. Known for his open-door policy to students, he regularly receives high ratings in course evaluations. Schellhammer and wife Mary have three daughters, Mary, Lorelei and Kirsten.

The Loraine McIlwain Bell Trustee Awards, established in 1996 by Mr. and Mrs. L.G. Cunningham, the late Mrs. Bell’s daughter and son-in-law, honor the UWA alumna who served as a teacher and nurse in West Alabama. Candidates for the awards are nominated by the University community, and the winner in each category is selected by a committee of peers. The award includes a plaque and a check for $1,000.