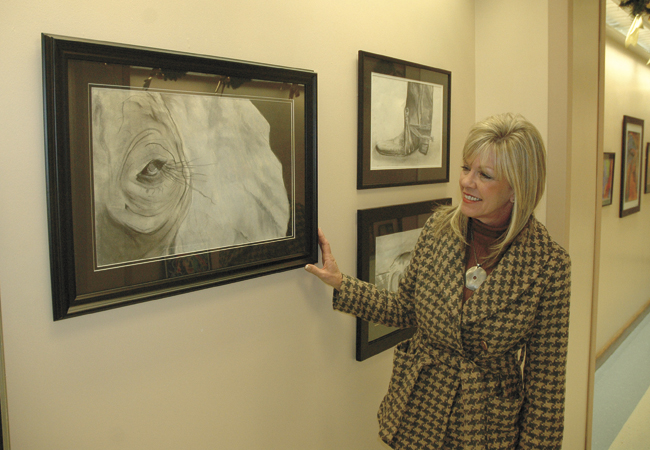 Bryan W. Whitfield has long exposed the community to local artists and vice versa since launching The Exhibit. However, over the next quarter, the hospital will show off more than 40 different artists in its front halls.

For the next few months, The Exhibit will provide a home to artwork of nearly four dozen Marengo Academy art students ranging from K4 through the eighth grade.

“Our kids were really excited to know their stuff was going to be on display,” Lee Singleton, one of two art teachers from Marengo Academy’s regular curriculum and extended day programs, said of the students reaction to learning of their role in the latest Exhibit.

The latest installment features 45 pieces whose subject matter ranges from cowboy boots to farm animals to college football mascots to Linden scenery all the way into the imagination.

Singleton is particularly fond of a piece done by then sixth-grader Anna Michael Crocker which focuses in on the left eye and part of the left ear of an elephant. The inspiration for the piece came from Crocker’s beloved Alabama Crimson Tide. The nature of the works is as varied and colorful as the artists behind them. One piece, done by then fifth grader Weldon Aydelott, is a look at the skyline with the Linden water tower in plain focus. Still another from the imagination of then sixth-grader Amber Ray features a lady with brightly colored hair.

While the subjects of the pieces are different, the mediums also vary from traditional paint to paper bags and duct tape. And then there is the piano player done with only Elmer’s glue and chalk.

“Most of these pieces of work have won at district and state competitions,” Chapman said. “Most of them are from last year, but we do have a few that are two or three years old that have won big that we have here.”

All of the artists will be in attendance at Sunday’s reception at 1:30.