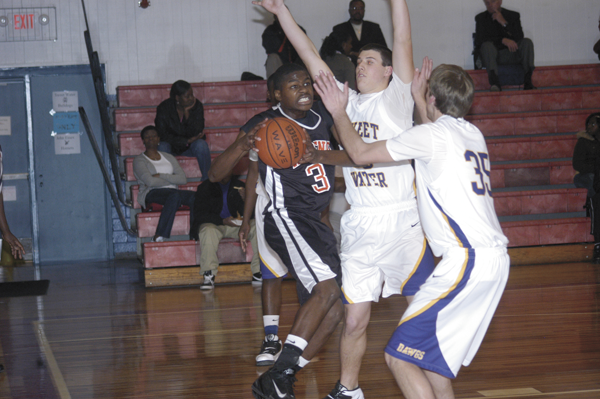 LINDEN — Sweet Water overcame early struggles to extend its season Tuesday with a 52-42 win over Marengo in Class 1A, Area 4 tournament play.

The Bulldogs trailed 16-11 at the end of the first quarter and did not regain the lead until only 1:07 remained on the third quarter clock.

“We finally started working the ball inside,” Sweet Water head coach Jonathan Farr said. “We’re an inside out basketball team.”

The Panthers had the opposite problem.

Marengo scored 16 points in the first quarter, getting off to a hot start.

However, the Panthers went on to score only 16 points in the second and third quarters combined, watching its four-point halftime lead become a four-point deficit heading into the fourth quarter.

Sweet Water closed the game out strong, scoring 16 of its 30 second half points in the fourth quarter to put the game out of reach.

“I thought my youong guys played really well,” Farr said. “I had a lot of freshmen and sophomores come up big on the floor (Tuesday night).”

Chris Landrum led all scorers, putting up 15 points in the contest.

Deon Waters added 11 points for the Bulldogs while Marcus Gamble finished with seven.

The win moves No. 4 seed Sweet Water from the play-in round of the area tournament to opening round action Friday night against top-seeded Linden.

The last meeting between the two teams came Friday, Jan. 21 and saw Linden down the Bulldogs 74-35.

Despite the scoring disparity just a few weeks ago, Farr is confident in his team’s ability to make a run.

“We’ve just got to get a gameplan up,” Farr said. “I feel like we can play with them if we play well. If we don’t play well, Linden is going to blow us out.”