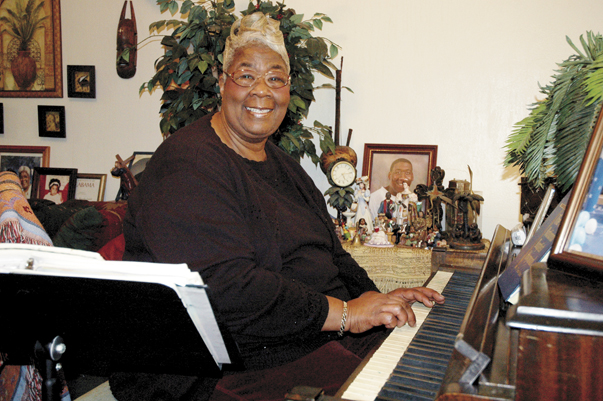 Sara Smith took up a hobby more than 10 years ago when she started playing piano and learned to read music. The acquisition of the art form began as a way to share something with her son, Christopher, who was taking up the instrument as a 13-year-old.

What it quickly blossomed into was a way to share her faith, her story and her encouragement with individuals and churches around west Alabama.

“For about three years, my song played for me,” she said of what started as a mother-and-son team traveling from church to church to perform gospel songs.

After time passed, Christopher felt the need to take his musical talents in another direction, making Sara a solo act for the first time.

“He decided he wanted to go to another group called the Gospel Echoes,” Sara said. But the absence of her son from her travels did little to discourage her efforts as she has persisted to sing at every opportunity for the last decade.

“I have been as far as Birmingham, Tuscaloosa, Greensboro and Sawyerville,” she said of her musical travels.

Now, as she readies to celebrate the 10-year anniversary of the founding of her musical mission, Sara reflects on the positives that have allowed her to find success in the venture over the last decade.

“I thank God for all that He has done for me in my life and all that he will do,” she said, citing her two children and two grandchildren as just a portion of the blessings she experiences everyday.

Sara embraces life with a passion as infectious as her smile. As much as her musical mission is a product of her faith, it is also a result of her affection for those who share this world with her.

“I love people. I’m a people person,” she said, reciting John 3:16 as she points out that man should love the things that God loves. “I put God first in my life. He will bless you if you just put Him first in your life.”

One of the initial obstacles she faced in her efforts to learn music and ultimately perform for others was her advanced age. She was 45 when she began lessons. Despite hearing the occasional discouragement, she persevered in the task. In the years since, she has come to appreciate the point in her life at which she began her melodic mission campaign. At 45, she had experienced much in her life, found herself more able to base her faith on her experiences rather than if she had attempted to undertake such an effort at a younger age.

Over the years, she has learned how to better construct her performances. She has continually improved and her music and her message.

“I feel 99 percent better than I did back 10 years ago when it first started because I’ve got people asking me to sing at their church and do something for God,” she said.

Now, she is readying to commemorate the 10th anniversary of her musical beginnings with an appreciation at Bethel Rock A.M.E. Church on Saturday, March 26 and the Demopolis Civic Center Sunday, March 27.

“The mayor will be at the Civic Center on Sunday the 27th,” she said. “He will welcome all of the guests.”