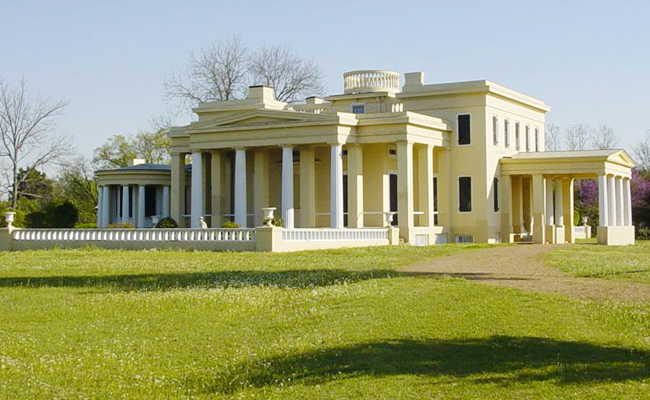 Gaineswood is getting back to it’s roots. And much like a trip to the hair salon, Gaineswood’s trip involves a dye-job.

The Alabama Historical Commission and the Friends of Gaineswood are partnering on an exciting new project – painting the exterior of Gaineswood. Preliminary work began in December.

Now that warm weather has arrived, the project is making rapid strides toward completion.

The exterior color is a departure from the familiar yellow that Gaineswood has been painted in the past few decades. The creamy tone of the new color scheme are documented historic colors.

“In 2005 architectural conservator George Fore of Raleigh, N.C. conducted an exterior historic finishes analysis,” said site director Eleanor Cunningham. “From his report, we chose wall and trim colors that are documented to have been used on the house (circa)1860.”

Bruce Lipscombe, director of collections and interpretation, said the color change also helps remove a mask that hid one of the home’s most recognizable featires.

“The late 20th century yellow exterior hides the illusion of a house built of limestone blocks, which is what Gaineswoodís builder Nathan Bryan Whitfield intended.”

In the mid-19th century, faux finishes were very popular and were used on both interior and exterior surfaces. As visitors approached Gaineswood on the winding carriage drive, they would be visually struck by the shining white temple. Today Gaineswood is recognized as one of the best examples of Greek Revival architecture.

A National Historic Landmark, Gaineswood was built by Nathan Bryan Whitfield. A

cotton planter and renaissance man of his time, Whitfield moved from North Carolina to Marengo County in 1834. Constructed during the period of 1843-1861, the Greek Revival house is owned and operated by the Alabama Historical Commission.