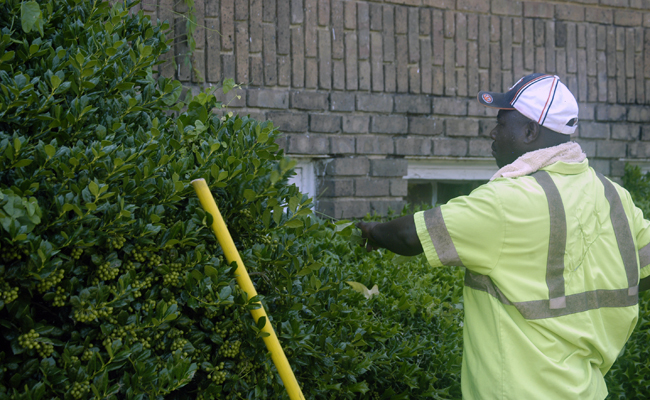 The Times Antonio McClain works to remove debris and over-growth from the bushes outside the old school yesterday morning. City employees and volunteers have been working all week to spruce up the town in advance of next week’s judging. - Jason Cannon

Judges from the America in Bloom (AIB) competition will visit Demopolis June 20 and 21.

As a new entrant in the 4,000-10,000 population category, Demopolis is one of 22 towns across America that this year is working on local revitalization programs with the hopes of being named the best blooming town in America.

This week, city horticulturist Barbara Blevins and her department will be hard at work with local clubs and volunteers putting the final touches on the town in preparation for the arrival of judges Bruce Riggs and Cindi Cope.

The couple resides in New Rochelle, N.Y. He recently held the position of curator of science at the Bruce Museum of Arts & Science in Greenwich, Conn.

During his 18 years at the New York Botanical Garden (NYBG), Bruce was involved with the horticulture and education divisions and administered the creation and implementation of the internationally recognized interpretation program for NYBG.

He has recently been involved in elementary school science and horticulture programs and has worked on projects for the American Association of Museums and the Institute of Museum Studies. He has been involved with Mountain Top Arboretum in Tannersville, N.Y., serving as president since 1998. Bruce is an avid traveler and has visited numerous gardens and natural areas.

Cindi Cope received the 2009 State of Arkansas Park and Recreation Volunteer of the Year Award for her contributions, dedication and commitment at the state and local level. Cindi serves on the Arkansas Litter Free Zone Advisory Committee, the Fayetteville Natural Heritage Association, the Community Wildlife Habitat Project and the Botanical Garden of the Ozarks board of directors.

She volunteers in the schools to promote the Litter Free Zone, promoting the Fayetteville Public Schools Green Team, and visits 10 classrooms each summer to teach about monarch butterflies. In her spare time Cindi is an active Washington County Master Gardener, chairs the Fayetteville Tree and Landscape Committee, serves on the Fayetteville Forward committee and volunteers for Keep Arkansas Beautiful. She has co-authored “The Ozark Friendly Landscape, Using Plants for Beauty and Biodiversity” and “Arkansas History as Told Through its Plants.”

“As a first-time judge, I look forward to learning from the cities I visit,” Cope said. “I can hardly wait to see the results of the horticulture department, your parks in Demopolis.

Visiting your website, it was clear the pride, history and quality of life in your community.”

Judges spend two days in each town and do extensive touring, have interviews with municipal representatives and meetings with community volunteers.

They evaluate eight criteria: community involvement, tidiness, environmental efforts, heritage preservation, urban forestry, landscapes, floral displays, turf and groundcovers. These criteria are examined across three sectors: commercial, municipal, and residential. Judges will prepare an extensive written evaluation offering observations of exceptional practices and suggestions for improvements. It is given to the community after awards are announced in October. Many towns use these evaluations as a blueprint for further enhancements to their quality of life and to support grant applications.

To date, nearly 200 towns and cities from 38 states have participated in the program and more than 20 million people have been touched by it. Awards will be announced on October 8 at AIB’s National Symposium and Awards, held this year in Washington, D.C.