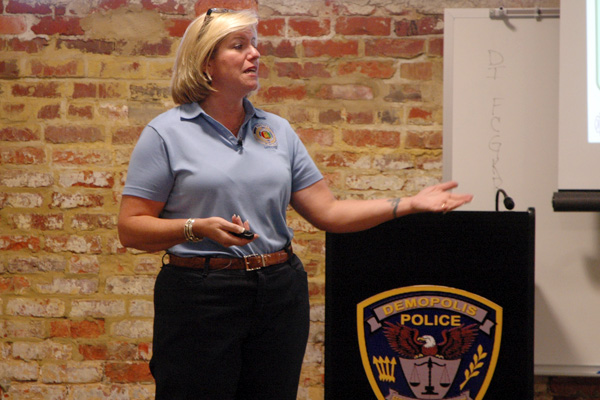 More than two dozen law enforcement officers from as far away as Louisiana met in Demopolis Wednesday to take part in a training session. The day-long seminar focused equipping officers to properly utilize social media.

“The main focus of today is how to use social media to better reach out into the community,” Daphne Levenson, who led the seminar, said.

“This is to allow them to know that you’ve got to have a social media presence with the public. Most people right now are on Facebook or Twitter,” Demopolis Police Chief Tommie Reese said. “We have a Facebook page with the Demopolis Police Dept. A lot of people are using Facebook as their source of information. If there is an incident that takes place, we can inform the public through Facebook.”

Levenson, the executive director of the Alabama Association of Chiefs of Police, focused her Wednesday efforts on educating officers about the usefulness and inherent dangers of social media.

Among those benefits are the ability to network and develop a rapport with the community. Levenson said there is a great deal of crime solving assistance that can be provided by the use of social media.

“This class is more along the lines of how to set up things such as submitting an anonymous tip,” Levenson said.

Levenson cited a case in Olive Branch, Miss. in which the local police department put out a Facebook alert in the case of a missing child. The alert got the community involved quickly and the child was found in short order.

“It is absolutely critical and that’s what this class is about,” Levenson said of police department’s maintaining a digital presence. “For law enforcement to just continue on the old ways of the 1950s, the public is no longer satisfied with that.

Levenson said police departments could also help themselves by accepting community assistance in other digital areas.

“We encourage police departments to open up their websites to accept pictures from the public,” Levenson said, citing that the practice would help law enforcement get information about traffic accidents and the like before getting an officer on the scene.

In addition to talking about the uses of Facebook, Levenson spoke on the shortfalls that come from the level of exposure social media can give, encouraging officers to abstain from posting incriminating information or pictures on their personal pages.

“It was also to let the officers know that it can get officers in trouble for posting things on there that would be harmful to a case,” Reese said. “A lot of my officers have Facebook pages. But nothing goes on there as far as the department at all. You have to be very leery of that because your Facebook page can wind up getting pulled into court.”

Levenson and her cohorts conducted Wednesday’s class at no charge to the Demopolis Police Department.

“We were actually in the area to help storm victims and Chief Reese had requested training,” Levenson said. “Since we were going to be in the area, we were able to do it for free.”

Information regarding the DPD and it’s social media extension can be found on Facebook by typing in Demopolis Police Department in the search field.