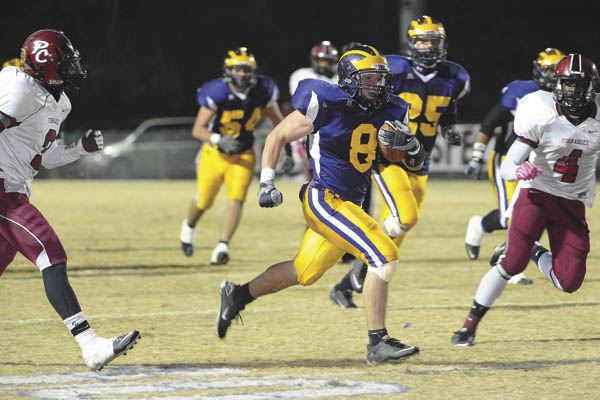 SWEET WATER — Brett Davis took over in the waning moments Friday night and willed his Bulldogs to a 38-36 win over Pickens County (11-2) in the quarterfinals of the AHSAA Class 1A state playoffs.

With Sweet Water (10-3) clinging to a 38-36 lead moments after surrendering a 90-yard kickoff return for a touchdown, Davis faked a handoff to running back Michael Thompson, tucked the ball and darted toward the left guard. After absorbing contact at the line of scrimmage, Davis pushed a pile of would-be tacklers 26 yards all the way to the Sweet Water 23 to seal the win.

Pickens had trailed 31-14 before Demarco Hall caught a bubble screen pass and took it 54 yards to give the Tornadoes new life. The ensuing two-point conversion play left Sweet Water up 31-22 with 7:29 to go in the game.

After Pickens forced a three-and-out on Sweet Water’s next possession, Hall made the Bulldogs’ night even longer when he took another screen pass 46 yards to paydirt, cutting the advantage to 31-29 with 4:03 to play.

Sweet Water’s offense again failed to achieve a first down, running the clock down to the 2:33 mark before punting the ball to the Pickens 20.

After a false start penalty, Pickens’ quarterback shook a trio of tacklers in the backfield and rifled the ball toward a seemingly open receiver before Davis closed in from his safety spot and pulled in the interception with one hand to create the only turnover of the contest.

Two plays later, Davis kept the ball on a bootleg around the left side and took it 26 yards for a touchdown, upping the Sweet Water advantage to 38-29.

“He won that one for us in the fourth quarter,” Sweet Water head coach Stacy Luker said. “That interception. That last run on that quarterback sneak.”

Davis’ run appeared to have put the final nail in the coffin of the Pickens season before Hall scooped the ensuing kickoff after it bounced twice on his own 10 and took it 90 yards to keep the Tornado threat alive.

“He was very valuable,” Pickens head coach Patrick Plott said. “In the second half, he stepped his game up and gave us a chance.”

Hall scored an earlier touchdown for the Tornadoes on a 5-yard run in the second quarter that gave his team a brief 14-7 lead. He finished the night with 129 yards on six receptions and four total scores.

Before Davis worked his fourth quarter magic, Thompson anchored the bulk of the Bulldog attack.

His 19-yard scoring run with 8:27 to play capped an eight-play, 82-yard drive and left Sweet Water with a 31-14 advantage. He toted the ball five times on the march, amassing 69 yards during the possession.

Thompson scored his second of three touchdowns with 1:13 to go in the third quarter when he broke through the middle for a 26-yard sprint that gave the Bulldogs’ a 24-14 lead.

Sweet Water took a 17-14 lead into the locker room after 22-yard field goal by Taylor Wilson split the uprights with less than a second to play in the first half.

Wilson’s kick came one possession after the Bulldogs mixed runs from Davis and Jarvis Lewis to soften the defense for Thompson’s 36-yard touchdown run with 2:29 to go in the second quarter.

Sweet Water’s first score came on a 12-yard touchdown run by Davis that was set up by a 53-yard kick return from Daniel Sewell.

Davis finished the night with 13 carries for 98 yards, totaling 68 of those in the game’s final quarter.

The win sends Sweet Water to the semi-finals where it will travel to face Linden in a rematch of the week four contest that saw the Bulldogs fall 25-14.