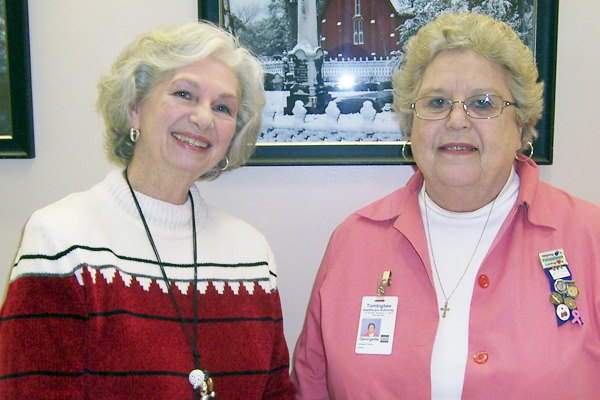 Hester Brown, a member of the Auxiliary since August 11, 2012 received a patch for 50 hours of service. She is a member of this year’s October Blood Drive Committee.

A 1,500 hour bar went to Georgette Griffith, a member of the group since August 12, 1999. She has been in charge of several United Blood Services blood drives at the Demopolis Civic Center. She has received a President’s Volunteer Service Bronze Award in for the past three years in a row. This year, she will assisted with the decorating the hospital for Christmas as she is a member of the Holiday Decorations Committee.

Elizabeth “Biboo” Webb, a member since September 11, 2003, received a 2,500 hour bar during the meeting. Since joining the group, she has tracked the service hours for all volunteers, as well as made beautiful shrouds for stillborn infants. In 2008, she received a President’s Volunteer Service Bronze Award and has received the Silver Award in 2005, 2006, 2007, 2009, 2010 and 2011 in recognition of her hours of service. During her tenure as an Auxilian, she has served four terms as treasurer of the group.

Receiving a 3,000 hour bar for hours of service was Rachel Lamb. A valued member of the group who has worked in many different areas since joining on June 10, 1999, Lamb has received the President’s Volunteer Service Bronze Award every year since 2005. She will be working this year as a member of the Spring Jewelry Sale Committee.

Two members of the group, Betty Baxley and Betty McCormick, received bars for 4,000 hours of service as of the end of the past quarter.

Baxley is in her 22nd year as a member of the organization, having joined on September 13, 1990. She has spearheaded many different committees during that time and has twice been selected as the Volunteer of the Year (2001 and 2011). She has served one term as treasurer, three terms as secretary, and four terms as vice president. She is currently the Historian of the Alabama Council of Hospital Auxiliaries. She received the Presidents’ Volunteer Service Bronze Award in 2005, 2007, 2008 and 2009 and the Silver Award in 2006, 2012 and 2011. She is a member of the Fall 2012 Jewelry Sale Committee.

McCormick, who joined the Auxiliary on October 11, 1993, has been very active in many different aspects of the organization, have served as chairman of several committees, two terms as treasurer and three terms as secretary. The Carolyn S. (Betty) McCormick Scholarship was named in her honor. She has received the Presidents Volunteer Service Bronze Award every year since 2005. She is currently a member of the Supply Room Committee.