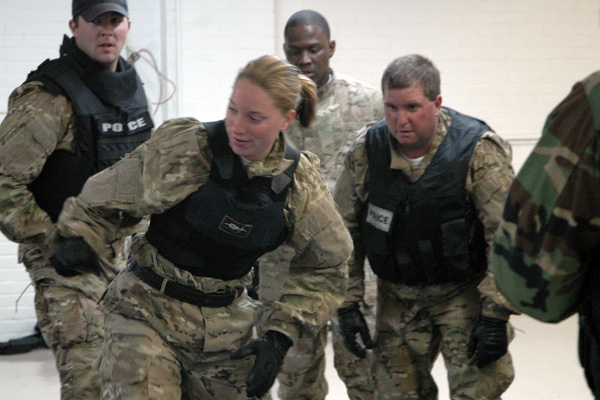 Officers from Demopolis, around the Black Belt and from as far away as Mississippi will be in Demopolis this week undergoing Alabama Peace Officers Standards and Training Commission (APOST) SWAT certification.

Training was funded and provided by APOST.

“What we’re training them for is to resolve high-risk incidents,” said training officer Robert Goodner. “Active shooter type incidents, barricaded subjects, hostage situations…anything that elevates itself outside the normal realm of patrol officer duties or investigators – something over and above where they would need a little more specialized training.”

“We spend an entire block, 12 to 14 hours, on the firing range trying to enhance their skill set with weapons because we feel that their skill sets have got to be elevated a little bit more, or they need to be at a high proficient rate.”

Goodner serves as the statewide tactical training coordinator. He is a retired Alabama State Trooper with 16 years military experience and has worked in SWAT for more than 30 years, including 20 years with state SWAT teams and 10 years as commander.

Participants in the school face a week-long battery of physical and written tests. This is second basic SWAT school in Demopolis since APOST began certification training in 2009.