Improvements made at Lower Pool 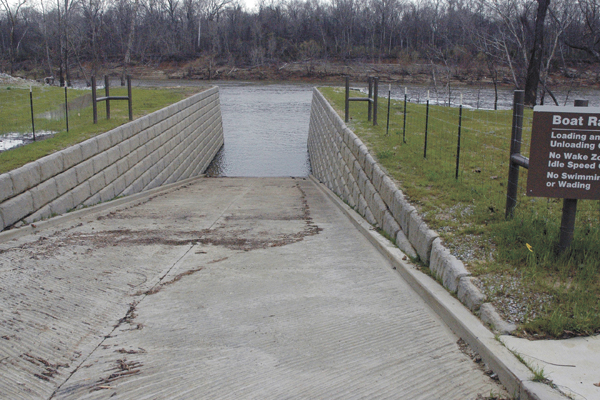 Lower Pool Park is back and better than ever after the completion of construction that began more than two years ago.

“Nothing was here except an old falling in boat ramp,” Brandon Smith of the U.S. Army Corps of Engineers said of the park, which closed to the public Monday, Jan. 11, 2010.

Since that time, signs have been up prohibiting foot traffic and parking during the construction process.

“We just kind of wanted to replace the boat ramp,” Smith said of the initial plans for the park, which later expanded to include improvements to the areas surrounding the boat ramp. “Our architects got involved and it became a lot more.”

The project, which was funded entirely by stimulus money, ultimately encompassed not only the renovation of the boat ramp, but also the creation of an overlook area that provides previously unavailable comforts to those seeking quality time near the falls.

“People always liked to come out here and watch the falls,” Smith said.

The overlook area now includes five small pavilions, four of which are equipped with picnic tables while the fifth consists of a swing.

Also on the overlook is a larger pavilion that includes a grill, an aesthetically-pleasing and spacious back deck and an area that will soon house numerous picnic tables.

That particular area of the park is open to the public, but is also available to groups and event parties for $35.

“The Spillway Falls Park Shelter is available for reservations for events,” Anne Cross of the U.S. Army Corps of Engineers said of the facility, which has an accompanying state-of-the-art restroom facility.

“There’s a walking trail hooked up to it too, Spillway Falls Walking Trail,” Smith said of the park. “It is actually going to connect to Bigbee Bottom Trail.”

The boat ramp, which is less steep and much sturdier than it predecessor, is available 24 hours a day and costs $3 per use or $30 for an annual pass. Those seeking to purchase an annual pass or reserve the event pavilion can do so by contacting the local U.S. Army Corps of Engineers office at 289-3540.

The park also now comes with volunteer hosts, who are responsible for preventing many of the previous problems the park has experienced.

“There was lot of vandalism down here when you left your boat and there was a lot of partying at night time,” Smith said. “We’ve built in two sits where we can have hosts to close the gates.”