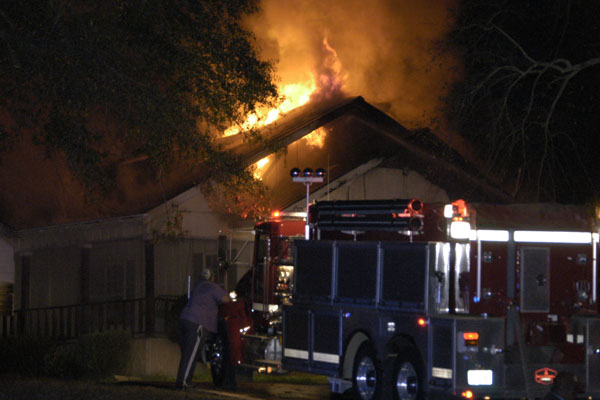 “We don’t know what happened,” Gene Etheridge, chief of the Surginer Volunteer Fire Department, said of how the blaze began. “It’s all up in the eaves. We’re just trying to contain it.”

Surginer volunteer firefighters worked alongside the VFDs of Dixon’s Mills and Sweet Water in an effort to contain the flames. With the roof in danger of collapsing, the firefighters were unable to get the height necessary to adequately reach the flames.

“The only way we could put it out is to get up on top and we can’t do it because the roof is caving in,” Etheridge said.

After nearly 20 minutes of battling the blaze, the fire burned off portions of the home’s siding and crept out into the night air.

“When it gets air like that, it’s tough to contain,” Etheridge said. The flames climbed several feet above the roof of the home after getting into the open air.

Firefighters were ultimately able to regain control of the blaze and extinguish it after more than an hour of combatting it.

The home, located at the intersection of Highway 43 and Highway 6 across from Central Baptist Church, was unoccupied at the time of the fire as its lone resident was out of town. First responders arrived on scene at approximately 9:15 p.m.