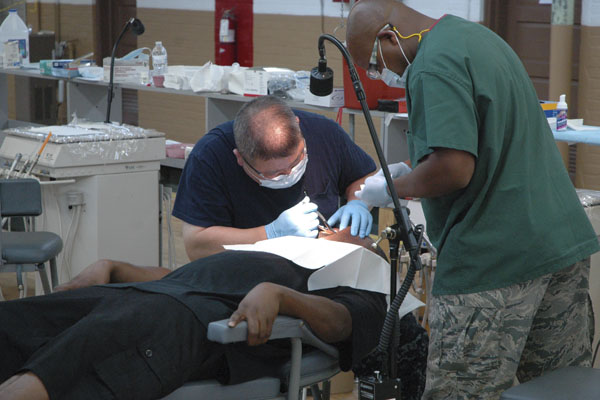 Prospective patients turned out in droves Tuesday for the first day of Operation: Alabama Black Belt 2012. The three-front military initiative is led by reserve personnel and is designed to provide health care to residents of what have been tabbed as “medically under-served” and “economically depressed” communities around Selma, Demopolis and Hayneville.

“We are told to expect in each location a total of 12,000,” First Lieutenant Nathan Beinert said of the total number of residents operation organizers expect will be treated during the exercise.

Beintert, the Assistant Officer in Charge, said personnel working out of the old New Era Cap Company building in Demopolis anticipate seeing between 3,000 and 4,000 people before doors close next week.

That figure seems to be easily achievable after Tuesday when 459 people in need of medical care had come through the doors of the building as of 2 p.m.

The design of the operation is two-fold. First, it provides health, eye and dental care to residents who otherwise may not be able to get it. Secondly, it serves as a field training exercise for military personnel.

“This is an excellent opportunity just in the fact that we are able to use our training that we learned in our schools,” Beinert said, pointing to the fact that the 77 service men and women on site are able to put their medical expertise into action in a unique marriage between their private sector backgrounds and their military service lives. The crux of the exercise is preparing such personnel to handle sizable crowds of individuals who may need treatment in the aftermath of natural disasters such as Hurricane Katrina.

The exercise consists of military personnel from multiple branches who are working in concert.

“For this Demopolis mission, we’re mainly Army National Guard,” Beinert said of the New Era operations, which also include personnel from the U.S. Navy. “The main component (for Operation: Alabama Black Belt 2012) is the Air Force. They are overseeing all of the operations.”