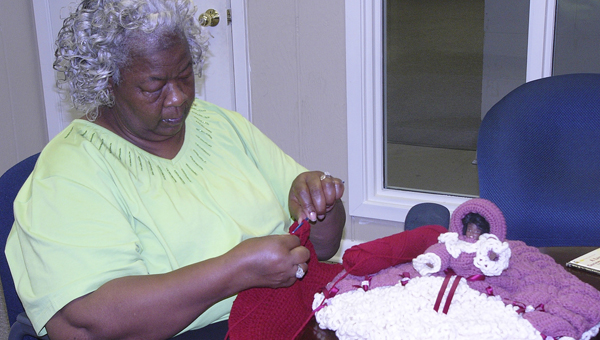 Sara Smith works on her current project, a doily, that is close to completion. The doll next to her is the one she made for her daughter 31 years ago.

At age 14, most kids have not found that one thing they are naturally gifted at doing or yet discovered hobbies they will enjoy for the rest of their lives.

Demopolis resident Sara Smith is an exception to that.

The 56-year-old started crocheting and knitting when she was 14 and she has been doing it ever since except for one five-year break.

Soon after her mother died she picked up a needle and started teaching herself to crochet.

“I was in the 10th grade, and my mother had just passed when I started crocheting,” Smith said. “My school teachers were the first people to make donations to me for my work, so I started making doll clothes and Afghans.”

Smith said that she was never taught how to crochet, though she did take sewing classes in school and is able to read patterns.

“I never use patterns when I crochet,” she said. “It‘s something that I figured out and I love doing it. I believe it’s a gift that God gave me.”

Smith said that her favorite things to crochet are ruffle dresses for dolls.

“I love making the ruffle dresses for dolls because it takes longer to do them,” she said. “I made one for my daughter when she was born, and she is 31 now. It is very old but still beautiful.”

One of these dresses takes her about two weeks to complete. Simpler doll clothes, such as shoes, can be made in just a couple of hours.

She makes hats in the wintertime, and sometimes quilts. A hat takes five hours to make, but the large quilts take about a month to finish completely.

“I could probably do them quicker, but I have to rest my fingers,” she said. “I spend about 20 hours a week knitting and crocheting. I don’t cook a whole lot, so when I’m not doing things for my church, I usually will pick up my needle and start working on whatever project I have going.”

She is currently working on a doily, which from start to finish takes her about two weeks to finish.

Smith said that the needle she uses is the same needle she has used since she bought it in 1975.

“No one has ever used it but me, so it is still in very good condition,” she said.

She said that she hopes to make some gifts to take to the nursing home around Christmas time as well.

Smith said she has never taught anyone how to crochet or knit, but would enjoy the opportunity if anyone were interested.

She has been playing piano for 11 years, and plays for her church, New Hope Baptist No. 1 in Jefferson.

“Doing these things just brings back old memories,” Smith said, “and I just love doing it.”