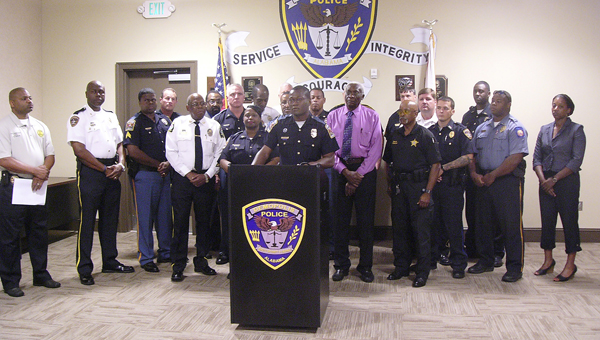 Local, regional and state officers gathered at the Demopolis Police Department on Friday, Aug. 17 to launch the “Drive Sober or Get Pulled Over” campaign, which urges drivers to not drink and drive over the Labor Day weekend. Shown is Trooper Charles J. Dysart for the Alabama Department of Public Safety with other law enforcement officers. The campaign runs Aug. 17-Sept. 3.

Local, regional and state law enforcement officers gathered at the Demopolis Police Department on Friday, Aug. 17 to launch a new campaign to urge drivers to not drink and drive.

The campaign, called “Drive Sober or Get Pulled Over,” will run Aug. 17 through Sept. 3, through the Labor Day holiday.

“We are excited about launching this campaign for the upcoming holiday season,” said State Trooper Charles J. Dysart.

Officers from Demopolis, Linden, Marion and other departments stressed that if you are caught driving under the influence, you will go to jail.

Demopolis Police Chief Tommie Reese said local officers will be out in “full force” to back up the campaign.

“If you are driving under the influence, you will get pulled over,” he said. “I encourage people to be responsible and remember the life you save may be your own.”

“Drive Sober or Get Pulled Over” is a national campaign and the state of Alabama received some funding from Alabama Department of Economic and Community Affairs (ADECA) to be able to put additional officers out on the road.

According to the National Highway Traffic Safety Administration website, almost 900 people nationwide have lost their lives in the last five years due to drunk driving crashes during the Labor Day holiday. In addition, nearly 11,000 people die on the roadways each year due to drunk driving.

On a local level officers are also urging people to wear their seat belts during the campaign.

Freddie Armstead, traffic safety director for the state’s southwest region, said officers are dedicated to stopping drunk driving but also alarmed by the amount of people not wearing seat belts.

“In 2011, 30 people were killed in crashes (in Marengo, Dallas, Hale, Perry and Wilcox counties) and 81 percent of those people were not wearing their seat belts,” Armstead said.