Editor’s Note: September is National Childhood Cancer Awareness Month. This story is the third in a series of articles about local families that have battled childhood cancer.

When Haley Dotson found out she would no longer be taking treatments for her cancer, she held a memorable conversation with her mom about heaven.

Her mom, Amy Price of Demopolis, smiled as she remembered Haley asking her, “‘Mom when you go to heaven, do you have to take a bath?’” He mom smiled and before she could answer, Haley persisted with her question, “‘Because if you do, do you take a bath with your wings on or off?’”

Years prior to this conversation, when Haley was only two-years-old her family began to notice her jaw was a little swollen.

“Thinking it was a mouth issue, we went to the dentist. Then we went to UAB and ended up at Children’s,” Amy said.

It was there Haley was diagnosed with Rhabdomyosarcoma, a form of cancer, which began in Haley’s jaw, noted as the reason for the noticeable way her jaw stuck out. 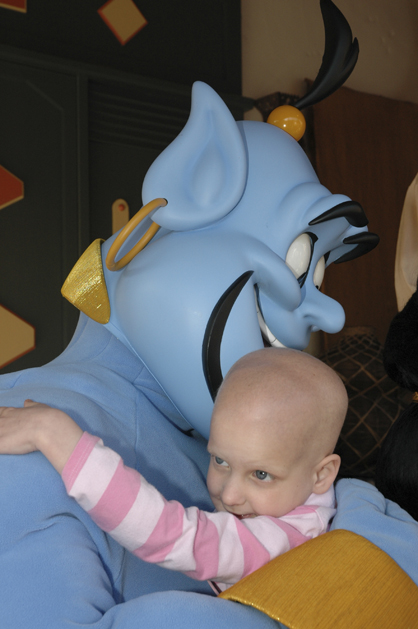 Haley Dotson and her family went to Disney as a part of the Make-A-Wish trip. Haley is shown hugging notable Disney cartoon character Genie from "Aladdin."

“When she was diagnosed, I mean I just got into mom mode. It’s like your life is totally turned upside down,” Amy recalled.

After one year of treatment, Haley would soon face a reoccurrence of the cancer – this time, in her leg.

Being that Amy and her family are from Demopolis, when the world spread about Haley an abundance of people from the area showcased their support through calls and cards.

Amy credits her parents as a mechanism of support as they were there to help her raise her other daughter Katelyn during times back and forth to the hospital in Birmingham.

“Cancer is just so hard on you in other ways too. It took us apart sometimes when my mom and dad had to raise Katelyn, while we went to treatment,” she said.

After about another year, “Rhabdo” decided to make a third appearance in young Haley’s life and this time it attacked her face and unfortunately, this time there was nothing the doctor’s could do.

“She just had such an old soul about her,” Amy said. “After talking to her about heaven, it was almost like she was OK.”

After that life-changing news, Amy’s family decided to move forward and cherish all of life’s moments in hopes of giving Haley a wonderful childhood.

Pictures of Haley dress the walls of Amy’s Demopolis home, where she resides with her parents and her daughter.

The pictures tell the story of many memories such as trips to Destin, where Haley played in the sand and the Make-A-Wish trip to visit Mickey and Minnie at Disney.

“She wouldn’t let it hold her back,” Amy said about Haley’s vibrant personality. “Haley was a mama’s baby. She was always on my hip and you couldn’t catch her not wearing pink or riding her tricycle around the house.”

Having spent many nights in Children’s during Haley’s four year battle, Amy said she saw how Children’s Hospital evolved because of the amount of children affected by this disease.

“There’s so many programs to help families with children with cancer now. There are so many children being affected by childhood cancer which is why awareness is so important,” she said.

“It was a different lifestyle because you had to be on the go 24/7. This is not only an illness, it is something that will change your life forever,” she said.

When the cancer revisited for the third time, Haley said she just wanted to keep her hair.

She entered kindergarten at age six and spent time learning with the other kids, until a routine visit to the hospital.

After that visit, Haley, likely, can be found splashing in her heavenly bathtub now after losing her fight against childhood cancer at six-years-old when she passed away in her mother’s arms on Feb. 29, 2008.

“I felt her spirit leave her ‘shell,’ which is the way I am able to be at peace,” she said. “There’s truly not a day that goes by that we don’t miss her.”