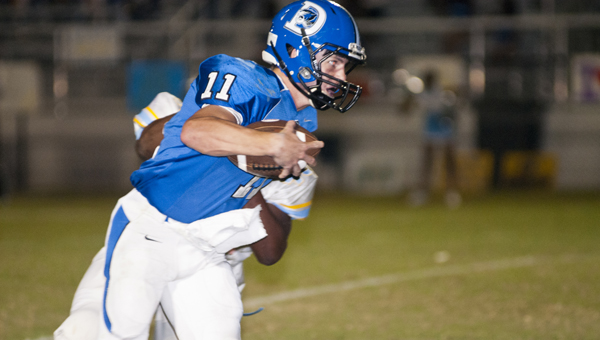 Demopolis quarterback Tucker Jones led his team in rushing with 61 yards on 15 carries.

Demopolis High School won big on the scoreboard, 42-19, despite being out gained by Selma in total yards. 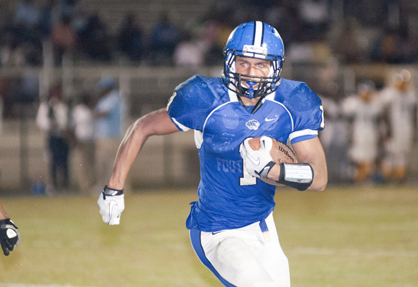 Demetrius Kemp goes in for a 6-yard touchdown run. He also returned an interception 76 yards for a score.

“We didn’t play to our level tonight,” Causey said. “Give credit to Selma. They played with some intensity.”

The Saints had a total of 280 yards, a little better than Demopolis High’s 272.

Selma coach Leroy Miles Jr. said his team couldn’t overcome their mistakes, which included eight fumbles, two of which were recovered by players in blue uniforms.

“I thought we made some mistakes that hurt us, but I thought our kids played hard,” Miles said. 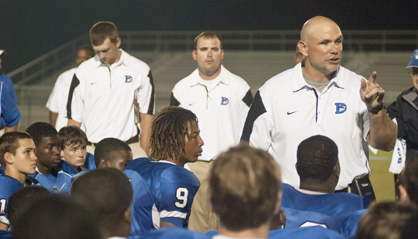 Demopolis coach Tom Causey addresses his team after the game.

Demopolis had 132 yards on the ground, compared to 88 for Selma. Through the air, the Saints led with 192 yards on 22 catches, while the Tigers had 140 on 9 completions.

Selma did have one interception, but that one turned out to be a 76-yard pick-six for Demopolis junior Demetrius Kemp.

Selma took an early lead with a 50-yard touchdown pass from Jesse Harris to Jeromi Davis. Demopolis would end up punting in its first possession, but three consecutive fumbles and a failed fake punt attempt gave the Tigers great field position.

Cortez Lewis would score on a 5-yard reverse, a play set up by a pass from Tucker Jones to Brock Montgomery. 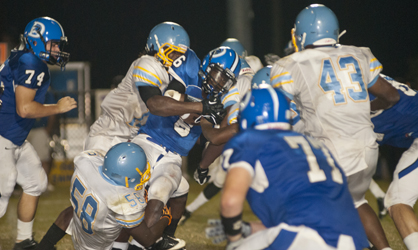 Roderick Davis runs the ball against the Saints defense.

Midway through the second quarter, Rodney Harper would catch a 32-yard pass from Jones to put the home team up 14-7. Roderick Davis found find the end zone from 10 yards out with a minute to go to extend that lead to 21-7.

Jones would get his rushing TD late in the third quarter on a seven-yard diving play. Kemp would grab his interception and take it home on Selma’s next possession.

Selma would respond with a 15-yard TD catch by Deondis Mendenhall to put things at 35-13.

The last two scores would come of a 6-yard run by Kemp and a 52-yard pass from Harris to Terrell Marshell.

Quarterback Tucker Jones led all rushers for Demopolis with 61 yards on 15 carries and one TD.