EDA says goodbye to board members

Josephine Hall-Blackwell and Scott Collier were presented with certificates of appreciation on Thursday, Nov. 8 at the last official board meeting for the year.

The certificate read: “In recognition of outstanding contributions to the Marengo County Economic Development Authority (MCEDA) from its creation until Dec. 31, 2012.” 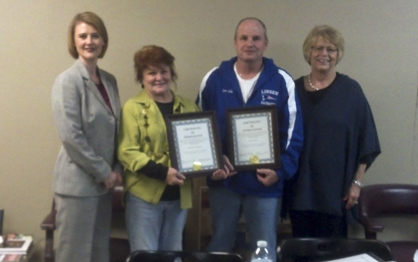 Brenda Tuck, executive director for the EDA, and others thanked the two for the time and effort they have given on behalf of the economic development authority.

Newly sworn in probate judge Laurie S. Hall will also leave the group. Elected officials cannot sit on the board.

Kathryn Friday, of the Marengo County Extension Office, said the board members have contributed greatly to the MCEDA.

“They have always had great attendance at meetings, participated in everything we have done and I would like to cry that they are gone,” she said.

The board will welcome new members soon.