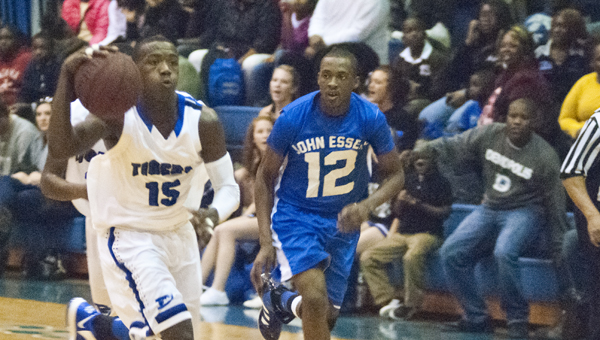 In the JV boys game, Tripp Perry dominated the game in the post. Demopolis led 22-0 after the first quarter and coasted from there. John Essex registered their first point on a free throw midway through the second quarter, and they trailed 28-6 at halftime.

The undersized Hornets only scored one basket after halftime, and the Tigers rolled to victory, 43-8.

In the girls game, they also had early success and were able to limit John Essex’s scoring opportunities. They led 17-0 after the first quarter and 27-6 at halftime.

They continued their scoring in the second half and kept the pressure on the Hornets, leading to a 47-17 victory. Caleb Washington led the team in scoring with 10 points.

Head coach Tony Pittman was not pleased, despite his team’s 30-point win.

“We were very lackluster tonight,” he said. “We weren’t focused. Our goal before every game is to improve over the previous game and we didn’t do that tonight. We have a lot to work on.”

In the varsity boys game, both teams got off to a slow start and had trouble finding the bottom of the basket. The score after one was 8-3 Demopolis.

In the second quarter, both teams still struggled, but found a little bit of a groove and Demopolis took a 21-14 lead into the locker room at halftime.

In the second half, Demopolis turned up the intensity on defense and John Essex struggled to score the rest of the game. Demopolis had their two best quarters to finish the game. They scored 15 in the third and only allowed 10 to take a 36-24 lead into the final quarter.

In the fourth, the Tigers had their biggest offensive quarter, dropping 20 on the Hornets on their way to a 56-30 victory.

“We’ve got to execute better,” he said, “but we played hard and I’m proud of that. We got a lot of minutes for our bench players tonight.”

All three teams will be back in action tomorrow night in Thomaston against A.L. Johnson. The games begin at 5 p.m.