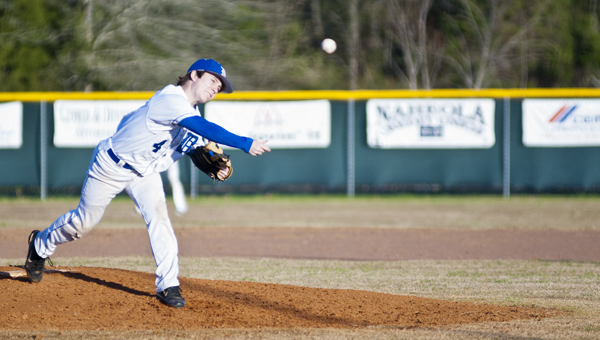 Walker Davis pitched the fourth inning for Demopolis on Wednesday afternoon against Sweet Water. He was credited with the win in the game.

The Demopolis Tigers and the Sweet Water Bulldogs faced off Wednesday afternoon on the diamond, and Demopolis came away with a 14-4 win in six innings of play.

For the Tigers, this was the first game they had played since opening night in Tuscaloosa on Monday, Feb. 18 because of rainouts.

“It feels like forever since we’ve been on the field,” Demopolis head coach Ben Ramer said. “It looked like our first game of the year without any defensive practices.”

Sweet Water led off to start the game with Wesley Anderson on the mound for the Tigers. The Bulldogs got to Anderson early with a leadoff single by Trae Pritchett and a double by Brett Davis. Tanner Luker knocked in Pritchett with a single to put the Bulldogs up 1-0. Tre Jones then knocked in Davis to make the score 2-0.

Luker and Jones crossed the plate on a throwing error by the Tigers to make the score 4-0 before Demopolis ever stepped into the batter╒s box.

In the bottom half of the first, Demopolis answered back and then some, hanging eight on the scoreboard.

Walker Davis led off for the Tigers with a double, and Brock Montgomery knocked him in with a triple in the Tigers╒ next at bat. Montgomery scored on a single by Devin Stroud. A single by Mason Rogers and a double by Anderson brought in Stroud. Seth Aiken was brought in as a pinch runner for Anderson. Michael Brooker╒s single scored Rogers to tie the game at four. Although it did not bring in a run, a double by Tyler Oates ended the day for Bulldogs starter Jacob Mendenhall, still with no outs recorded.

Sweet Water brought in Harris Etheridge to retire the side, but he was unable to do so before four more Tigers crossed the plate. Demopolis was able to bat around before the Bulldogs were able to record an out.

Demopolis brought in Will Tucker to pitch the second. He struck out two and hit a batter before getting out of the inning.

Etheridge stayed in the game for the Bulldogs and retired the Tigers, three up, three down in the bottom of the second.

Stephen Stewart came in for Demopolis to pitch the third. He gave up two singles, but still got out of the inning without any runs crossing the plate.

The Tigers were able to score one in the bottom of the third after a sacrifice fly by Josh Mangum scored Oates. Walker Davis came in for the Tigers to pitch the fourth and only gave up a single before retiring the Bulldogs.

Micah Agee came in to pitch for the Bulldogs in the fourth, and Demopolis plated one more on an RBI single by Stroud that brought in Montgomery. Stroud then pitched for the Tigers in the fifth and retired the Bulldogs, three up, three down.

Demopolis added three more in the bottom half of the fifth. Brett Davis came in to pitch for Sweet Water, but a bases-loaded walk to Montgomery scored Tucker. He then gave up a two-RBI double to Rogers to make the score 13-4.

Brooker pitched a perfect fifth for the Tigers, and in the bottom half of the inning, Sweet Water brought in Danny Nevills. Demopolis was able to load the bases and Mangum knocked in Aiken to end the game at 14-4.

Ramer said the time off due to the rain had an affect on the play of his team.

“You could tell we weren’t prepared mentally,” he said. “We’ve been in the cages a lot the last couple of weeks, but we haven’t been able to use the field. After the first, our pitchers did a very good job.”

He added that he came into the game wanting to throw seven different pitchers, one for each inning.

“After the first, our pitchers settled down and got the ball across the plate,” he said.

Ramer also said that the bats are going to have to stay hot to win a lot of games this season.

Demopolis (2-1) travels to Thomasville on Friday night, and Sweet Water will be at Jackson that same night.