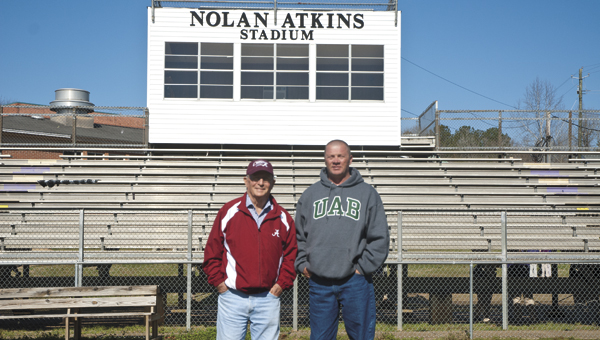 From 1978 to 1986, Sweet Water High School was able to win its first four state championships in football. From 2004 to today, the Bulldogs have added five more titles to that total.

Needless to say, Sweet Water football has become highly regarded in the Blackbelt of Alabama.

The winning tradition at the small school in south Marengo County began with head coach Nolan Atkins. He took over the program in 1966 after being an assistant coach at Escambia High School for three years.

At that time, Sweet Water had not been the football powerhouse that it is known as today. Their best seasons up to 1966 had been a two-year stretch under Fred Ramsey in 1953-54. The Bulldogs went 9-1 in 1953, and 8-2 in 1954. After those seasons, Sweet Water struggled until Atkins arrived.

“I interviewed with Fred Ramsey who was the athletic director at the time, and he offered me the job,” Atkins said. “I was the only coach on the staff, I coached all of the sports, and I taught at the school as well. In 1967, we hired an assistant coach, Mitchell Scott, and we added on from there.”

Atkins’ teams improved their record every year from 1966 to 1969, and the Bulldogs achieved their first undefeated season in school history in 1969 to make the playoffs and the state championship game.

“In ’69, we went undefeated, but got beat in the finals by Excel,” Atkins said. “Then in ’70, they closed the school to make it into an elementary school. I went to Florida to coach for a year, but they reopened the high school in 1971 and I came back.”

Scott was still assistant coach under Atkins when the school reopened, and Atkins said the team improved every year and were in the state playoffs every season, but just could not get over the hump to win a state championship.