University of West Alabama professor and athletic trainer Dr. R.T. Floyd has been selected by the National Athletic Trainers’ Association for its Hall of Fame. Floyd will be honored at an induction ceremony scheduled for June in Las Vegas. 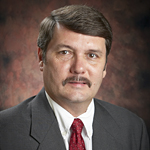 Dr. R.T. Floyd, director of athletic training and sports medicine at UWA, will be inducted into the National Athletic Trainers’ Association Hall of Fame in June.

Floyd, who’s been on the UWA faculty since June 1980, is director of the Athletic Training and Sports Medicine Center at UWA. He is program director for the CAATE accredited athletic training education program and is chair and professor in the department of physical education and athletic training.

A licensed athletic trainer and emergency medical technician, Floyd is a certified member of numerous professional organizations including NATA, the National Strength and Conditioning Association, and the Athletic Equipment Managers’ Association.

Floyd serves as vice-president for district relations on the NATA Research and EducationFoundation Board of Directors and will become its President in June. He was presented the Most Distinguished AthleticTrainer Award by the NATA in 2003 and received the organization’s Athletic Trainer Service Award in 1996. The Hall of Fame Honor, he says, is an honor for him but recognition of those he serves.

“I am very appreciative just to be considered. This is an absolutely tremendous honor and is really a credit to so many who have been instrumental and so supportive throughout my career. I appreciate the wonderful students, patients, staff and administration as well as my professional colleagues across the nation who have taught me so much,” Floyd said.

The honor is one that UWA President Richard D. Holland says is most fitting for Floyd, one of UWA’s most decorated faculty members.

“I have the highest regard for Dr. R.T. Floyd and the Athletic Training Program. He has provided this institution with dedication and integrity, and you hear this fact from the testimony of his students. I believe that Dr. Floyd is one of the most productive faculty members on this campus, and he is all-deserving in every award he attains,” Holland said.

Floyd’s involvement with regional and national organizations, in addition to his campus work, is a testament to his work ethic, according to Holland.

“R.T. has no concept of a normal workday. He willingly works 24 hours a day,” Holland said of Floyd.

Floyd served as the Head Athletic Trainer for the Blue-Gray All-Star Classic in Montgomery from 1977 through 2001, after spending two years on the annual event’s athletic training staff. He is a 1974 graduate of Lowndes Academy, where he worked as an all-sports athletic trainer for four years, before earning a B.S. and M.A.T. in physical education from UWA in 1980 and 1982, as well as an Ed.D. in Human Performance Studies from the University of Alabama in 1995.

Floyd was named to the UWA Athletic Hall of Fame in 2001 and tabbed by “Outstanding Young Men of America” in 1982, 1983, 1984 and 1986. He received the District IX Award for Outstanding Contribution to the field of Athletic Training by SEATA in 1990 and the Award of Merit in 2001 before being inducted into the SEATA Hall of Fame in 2008.

In 2004, Floyd was inducted into the Alabama Athletic Trainers’ Association Hall of Fame. In 2007, he received the NATA Sayers “Bud” Miller Distinguished Educator Award. The NATA Foundation recognized him with the Volunteer Service Award in 2011. He was named to Who’s Who Among America’s Teachers in 1996, 2000, 2004, and 2005.

In 1996 he was presented the College of Education Alumni Achievement Award by the University of West Alabama National Alumni Association. In 1997, UWA recognized Floyd for outstanding achievement in scholarship, teaching, and leadership by presenting him with a Loraine McIlwain Bell Trustee Professorship. In 2012, he was presented the Great Minds Award by the UWA Phi Kappa Phi Honor Society and the Nellie Rose McCrory Service Excellence Award by UWA.

Previously, Floyd served as President of the UWA Faculty Senate and completed two terms as President of the Alabama Council of University Faculty Presidents. In February 2013, he became chair of the Higher Education Partnership in Alabama. He is author of the textbook “Manual of Structural Kinesiology,” now in its 18th edition, and co-author of “Kinesiology for Manual Therapies.”