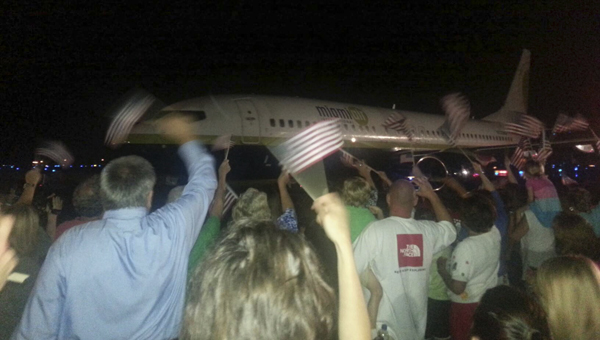 A large crowd gathered at the airport in Tuscaloosa to see 98 veterans take off to Washington, D.C., for an Honor Flight to see the memorials dedicated to them.

Since 2005, the Honor Flight program has been taking World War II veterans, and now Korean and Vietnam veterans, to Washington, D.C., to see the memorials dedicated to their service and sacrifices, and recently, a local resident had the opportunity to take the trip.

Korean War veteran Joe Hill served in the United States Navy from March 21, 1952, to March 21, 1960. He took an Honor Flight on Saturday, May 18 out of Tuscaloosa to see the different memorials in the nation’s capital.

The Rotary Club of Tuscaloosa sponsors an Honor Flight every so often, and Hill was able to get a spot on the most recent flight.

“It was a really good trip,” Hill said. “It was one of the most pleasant trips I’ve ever been on. Everybody was so good to us. People greeted us everywhere we went, and we had a crowd waiting for us at the airport when we returned. I was just expecting it to be a trip up there and back. I didn’t know there were that many nice people in the world.”

For Hill, it was his first trip to Washington, D.C.

“I used to travel a lot, but it was mostly on the West coast,” he said. “I never really thought about going up there. It was definitely something to see.”

The trip in its entirety only took about 14 hours. Tuscaloosa Rotary Honor Flight IV left Tuscaloosa at 6:30 a.m. Saturday morning, and the group of 98 veterans returned around 7:30 p.m. Saturday night. They landed in Baltimore, and were bused to see the different memorials.

Accompanying him on the trip was Hill’s shipmate from his time in service, Franklin Lucas, who lives in Montevallo. 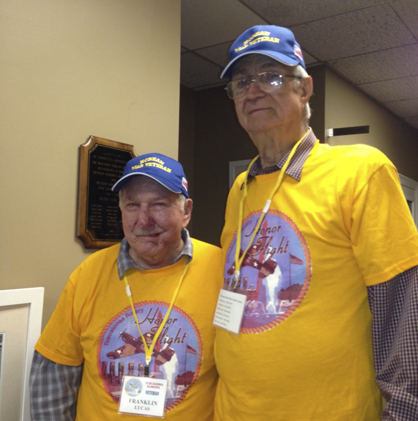 Joe Hill, right, and his friend from the Navy, Franklin Lucas, left,  spent the day together during their Honor Flight tours. They served on the USS Whiteside together from 1952-1956.

“He’s the one that told me about the trip, and my daughter, Laurie [Willingham], really wanted me to go,” he said. “We were big buddies while in the Navy, and we were able to stick together on the trip.”

The group, made up of 12 WWII veterans and 86 Korean veterans, saw the WWII memorial, the Korean and Vietnam memorials, the Iwo Jima memorial and Arlington National Cemetery, where they saw the Changing of the Guard at the Tomb of the Unknowns.

“I enjoyed it all, really,” Hill said. “I was especially interested in the Korean monument since that’s when I served, but it was all interesting. Arlington and the Changing of the Guard were something else. I had seen pictures of everything, but it was unreal to see in person.”

During his time in the Navy during the Korean War, Hill served on a cargo ship carrying supplies to Japan for the troops on the ground.

“I made 12 complete trips to Japan and back during my time in the Navy,” he said. “We would spend up to six months there at a time.”

He added that he wouldn’t take anything in the world for the time he spent in the Navy.

This was the fourth Tuscaloosa Rotary Honor Flight, but it was the first that they took Korean War veterans.

“I would recommend the trip for anyone that is able to go,” Hill said. “You stay busy and you see a lot. It was a wonderful trip.”