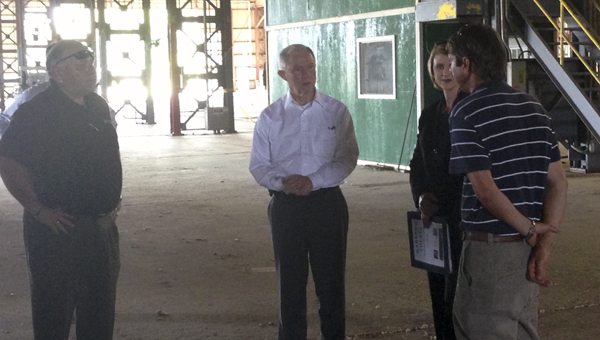 Sen. Jeff Sessions was in Demopolis Thursday to tour the port and the surrounding area.

Demopolis Mayor Mike Grayson and Brenda Tuck, executive director of the Marengo County Economic Development Authority, showed the senator around the port, explaining what it has to offer to the area and the state.

“The development of the port would be good, not just for Demopolis and Marengo County, but the entire region and the state,” Grayson said.

The 100,000 square-foot building at the port was built in the 1980s, but it was never developed as intended. With it being behind the airport, near the river as well as two separate railroads, it could serve as a great hub for large businesses, according to Tuck.

Sessions said as long as there continues to be economic growth, sites like the port will be sought after by corporations.

“If we maintain economic growth, even though it’s only around two percent right now, people will be looking for these kinds of sights,” he said. “Right now though, the economy isn’t moving fast enough. The national debt is a drag on that growth.”

Grayson told the senator that not only is Demopolis reaching out to people about the site, but they are also receiving calls about the site.

“I like the approach of the people here,” Sessions said. “They obviously want to improve the port and utilize it. The state also recognizes that it’s a prime location. The fact that Demopolis has people calling them about the location says a lot.”

Sessions said that out of the entire federal budget, only a little over one percent is spent on infrastructure.

“We spend hardly over one percent of the budget on infrastructure,” he said. “We need to do better with that. We can’t grow without infrastructure.”

He added that he and many other people in Washington, D.C., are working hard to make sure waterways are properly funded.

“The transportation companies want to pay a tax, like a user’s fee, to use the waterways to help improve the waterway system,” he said. “Tax bills have to originate in the House, not the Senate, but if that can get done, it should put us in a better position.”