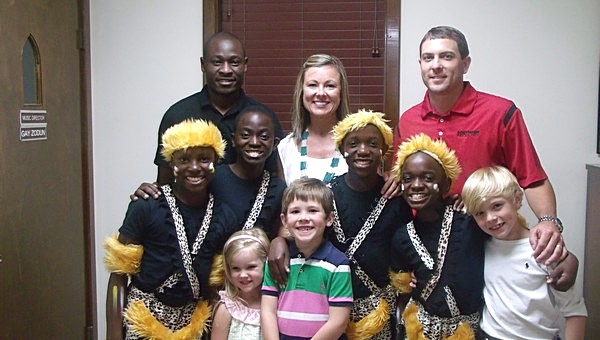 First United Methodist Church pastor Art Luckie joked with the attendees of the Mwangaza choir presentation held at the church Friday night, saying ‘he always wondered how to fill a Methodist church on a Friday night.’

Luckie certainly got his answer as he talked to the packed fellowship hall of people, who had all come to hear and see the singing and dancing presented by the Ugandan choir.

With smiles seemingly stretching from Demopolis all the way back to Uganda, the some 21 children marched out onstage and filled the room with song.

The children stayed with host families during their time in Demopolis. The Bell household typically is only filled with the playful sounds of their children Jay, Cameron and Susanna. However, this weekend four more children were added to the bunch as their family agreed to be a host to the children and their assistant tour director, William Kiweewa.

“It has been such a rewarding experience for us,” Claire Bell, of the FUMC church said.

Bell said she was asked would she be interested in hosting the children and their director and she agreed.

“They have spent two nights with us and when they leave I’m just gonna cry,” Bell said speaking of how quickly the children had stolen their hearts.

William said this tour is the children’s first visit to America and it is interesting to see their view of the country’s differences from Uganda.

“We had a lot of ideas for activities to entertain the children, but when they saw the pool that was it,” Claire said.

Many of the boys smiled and said they had so much fun swimming when asked if were they enjoying their stay in Demopolis.

Mwangaza, the Swahili word for shining light, truly described the young children singing and dancing songs all with a similar message to praise Jesus Christ for the things he has done in their lives.

“We are touring mainly in Texas, Colorado and Alabama. We were connected to the church through our friend Sydney,” William said in reference to Demopolis’ own Sydney Hasty.

He said the choir is from Gaba Community Church in Uganda. The stop in Demopolis was near the end of their tour and they expect to leave America at the end of June.

Sprinkled throughout the concert, there were several times the children sang in a native language called Lugandan.

Other treats for the attendees were the incorporation of traditional dance and drum playing. The children were also joined by Kiweewa and choir director, Freedom Kitengejja for those performances.

“There is nothing to hard for the Lord,” Freedom said. “God has set me free from hopelessness.”

Children also used drumsticks and their hands to make the rhythmic beats, all while the others sang the uptempo songs. As a way to honor American heritage, the children sang “America, the Beautiful” during the concert. 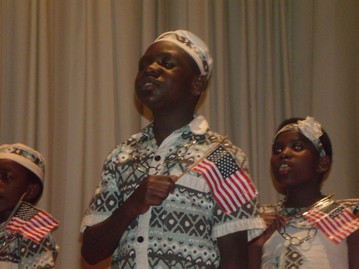 When setting foot on the stage Friday night, each child wore a chain around their necks to symbolize the weight they once carried such as hopelessness, shame, abandonment, abuse and fear.

Ugandan choir member Faith stood before a filled room at FUMC and told attendees of how only years ago, she couldn’t walk. She then added after she had gotten so ill, they thought she would pass away like her other five siblings.

Not only was she walking, but her young body was filled with such life as she sang and danced with Mwangaza choir.

After she spoke about how God had freed her from her situations, she removed the chain necklace and quoted John 14:14, which states, “You may ask me for anything in my name, and I will do it.”

William brought greetings from Uganda when he spoke onstage. After sharing his testimony of overcoming illness leading him to being on life support, he urged those in attendance to pray for the children in the choir.

Those in attendance also watched a video by Africa Renewal Ministries, the organization supporting the choir, that showcased a message about the many children in Uganda that still need help through sponsorship.

Sponsors serve as a method of encouragement as well as a financial supporter aiding children’s education and daily needs.

Those interested in more information on sponsorship or the Mwangaza choir are encouraged to visit www.mchoir.org.

“You may not change the whole world, but you will change the world of one,”  William said. 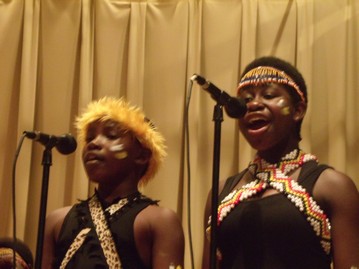