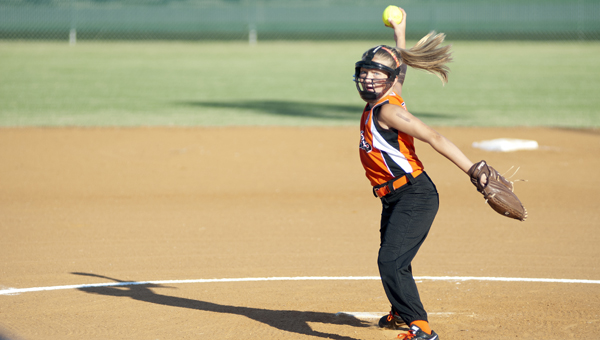 Linden Angels All-Stars pitcher Mary Grace Sheffield shut down the Demopolis lineup while she was in Friday night’s game.

The Demopolis and Linden All-Star Angel softball teams faced off Friday night at the Demopolis SportsPlex in the first game of the District 8 north tournament.

Both teams started off strong defensively, but the Linden All-Stars got their offense going in the top of the second inning.

Riley Newton led off the inning with a walk and she was brought in on an RBI single from Makenzie Moore. Back to back walks to Alexia Little and Ashleigh Overstreet, followed by a single from Avry Davis and another walk to Reagan Pritchett set up the Linden All-Stars to score six more runs in the inning. Lexi Pritchett brought in one with a walk, then April Schroeder drove in three with a double. A triple by Mary Grace Sheffield brought in the final run of the inning. 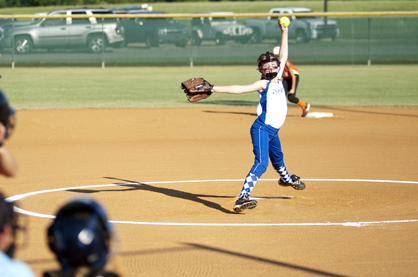 Linden led 7-0 after the second inning. Sheffield was in the pitcher’s circle for Linden, and was able to keep the Demopolis bats quiet with four strikeouts in two innings pitched.

Linden added five more runs in the top of the fourth with RBIs from Overstreet and Sheffield. Alexia Little, Overstreet, Davis, Schroeder and Jordyn Moore crossed the plate in the inning.

In the bottom of the fourth, Demopolis was able to get one run across the plate when Molly Katherine Harrison scored on a passed ball. Demopolis loaded the bases in the inning, but Linden was able to get out of it without another run scoring.

Linden won the game 12-1 in four innings because of the 10-run rule.

Sweet Water got on the board first in the bottom of the first inning. An RBI groundout by Kazaria Kelly scored Abbigail Strawn, and an inside the park home run by Tanesha Tucker brought in Peyton Ramsey ahead of her. Ava Hill also brought in Shazaria Kelly on an RBI groundout.

Demopolis got one run back in the second when Timya Thurman scored on a throwing error by Sweet Water. Sweet Water led 6-1 after two.

Sweet Water added two more in their half of the second on RBIs by Enya Champion and Strawn.

Demopolis brought one more across the plate in the third with an RBI single by Jessica Thomas that scored Rashelle Irvin.

In the top of the fourth, Demopolis scored two more runs on an RBI single by Mary Creigh Smith that brought in Taylor Pipkins and an RBI groundout by Haylee Rowley that scored Smith. Demopolis cut Sweet Water’s lead to 6-4 going into the bottom of the fourth.

Sweet Water answered back, though, with a big fourth inning, scoring four runs. Scarlett McGIllberry, Champion, Strawn and Kazaria Kelly crossed the plate in the inning to give Sweet Water a 10-4 lead.

Demopolis added one run in the top of the fifth on an RBI single by Thomas that scored Irvin, but Sweet Water got out of the inning to win the game 10-5.