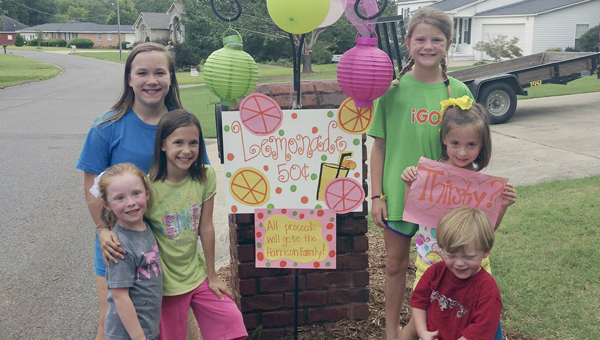 Six children opened a lemonade stand Friday afternoon at Marengo Drive with the proceeds going to Amanda Harrison and her family. Shown left of the sign are Anna Causey, Kelsey Causey and Ellie Kaye Meadows; and right of the sign are Abby Grace Cameron, Riley Windham and Bryce Meadows.

Riley Windham, 4, and Ellie Kay Meadows, 5, set up a lemonade stand July 19 to raise money for Amanda Harrison, a friend to their mothers.

Harrison, kindergarten teacher at Westside Elementary, was diagnosed with encephalitis earlier this summer. She is currently undergoing rehabilitation in Birmingham.

Riley and Meadows wanted to set up the stand to “help Mrs. Amanda.” The girls had heard their mothers discussing different fundraisers, and they wanted to create their own.

The lemonade stand was set up on Marengo Drive for more than 2 hours on Friday. While Riley and Ellie Kay started the stand, Anna and Kelsey Causey, Abby Grace Cameron and Bryce Meadows joined the girls to help with the good cause.

The children sold lemonade until they were out of cups. They raised more $250 selling lemonade and collecting donations.

In addition to the children’s fundraiser, an account has been set up at Trustmark Bank for the Harrison family.