Amanda Lynne Hall and Bradley Alan Burch of Tuscaloosa were married on June 23 in a double ring ceremony at the Foscue House in Demopolis. The Rev. Ed Pickel officiated the 4:30 p.m. outdoor ceremony. 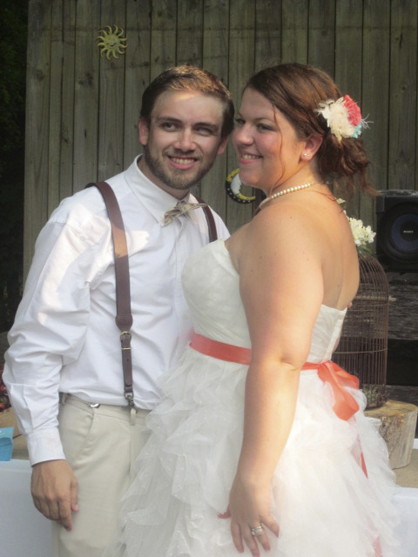 Given in marriage by her father and her step-father, the bride wore a stunning white strapless gown which featured a sweetheart neckline with ruching detail on the bodice, cascading ruffles flowing throughout the swiss dot tulle ball gown skirt and sweep train, with a coral ribbon sash, and carried a bouquet of coral and pink roses and white hydrangeas.

Natalie Ford of Tuscaloosa served as maid of honor. The bridesmaids were Audrey Patterson, sister of the bride, and Ashley Burch, sister of the groom, all wearing coral short dresses with ruffle detail, and each carried white hydrangeas.

Serving as best man was the groom’s brother, Brian Burch, of Tuscaloosa. Groomsmen were Sam Foster and Adam Johnston, both of Tuscaloosa.

A reception followed the wedding on the patio at the Foscue House.

After a trip to Chattanooga, Tenn., the couple is at home in Tuscaloosa.