Paige Ip of Meridian is the new Miss University of West Alabama. The sophomore pre-medical major will represent the University in the 2014 Miss Alabama Pageant, a Miss America preliminary held in Birmingham at the Wright Center on the campus of Samford University in June.

Miss UWA 2014 Paige Ip was crowned by Miss UWA 2013 Tierra Robinson. The daughter of Kim and James Pearsell reminisces on her childhood dream of touching others through her actions. 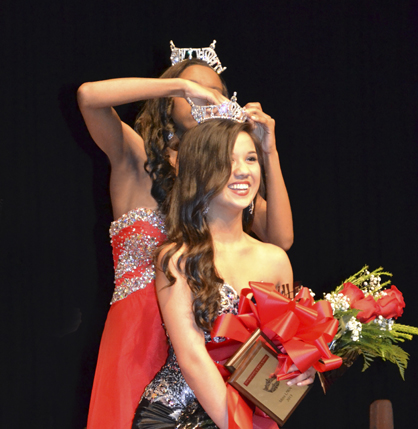 “When I was little, I always wanted to do something with my life that could change the lives of others. When I was crowned Miss UWA, I felt like my dream was finally about to come true. This will open so many doors to raise awareness for my platform,” said Ip.

Ip’s platform is “Speaking Up for Those with Down syndrome.”

“I chose to focus on raising awareness for the many individuals who are diagnosed with Down syndrome. The issues that surround Down syndrome became apparent to me when I first met my nephew, Baby Jack. Although he isn’t my biological nephew, I see him as being part of my family. Jack truly opened my eyes to what it is like to love someone with such a disorder and I am forever changed by him,” Ip continued.

“Down syndrome is one of the most diagnosed chromosomal disorders, but it is also one of the least funded as well. By raising awareness for this disorder I hope to remove the negativity that is associated with those who have Down syndrome. By opening the eyes and hearts of others to see what this disorder really is, I hope to encourage those to reach out and lend a helping hand to care for those with Down syndrome,” she said.

“I am honored to hold two titles here at UWA—it’s such a blessing. I will continue to represent the University to the best of my ability as Miss UWA and Miss Paragon,” said Ip.

Ip was also selected as the talent winner for an acrobatic jazz routine to Prince’s “It’s About That Walk.” Senior Alesha McNeese was selected as first alternate.