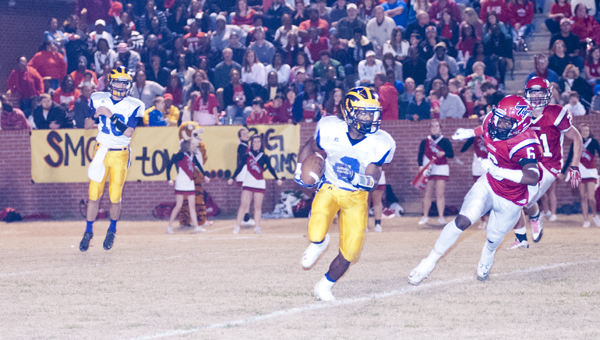 Jakoby Aldridge breaks a run to the outside. He finished the game with 335 yards and four touchdowns on 36 carries.

Sweet Water claimed a spot in the AHSAA Class 2A semifinals with a 34-24 win over Luverne on Friday night.

The Bulldogs were led by running back Jakoby Aldridge, who finished the game with 335 yards and four touchdowns on 36 carries.

“We knew we were going to need a lot out of him because of [Luverne’s] passing game,” Sweet Water head coach Stacy Luker said. “A lot of our other backs had to play big on defense, so we knew we’d have to lean heavily on Jakoby.”

Sweet Water trailed early in the game, but they adjusted to the speed of Luverne’s athletes and were able to make some plays defensively as the game went on.

Luverne opened scoring on a 63-yard punt return for a touchdown by Preston Sankey. Jon Sanders missed the extra point, one of three misses in the game, and the Tigers led 6-0.

Sweet Water went three-and-out on their next drive, and Luverne quickly drove down the field with big plays through the air. Quarterback Kenterius Womack connected with TraQuez Watkins for a touchdown to put the Tigers up 12-0 in the first quarter.

Aldridge scored his first touchdown of the game with 8:32 to play in the half from three yards out. The Tristan Weatherly extra point was good, and the Bulldogs trailed 12-7.

Ke’Vontae May scored from two yards out on Luverne’s next drive, putting them up 18-7 after the failed two-point conversion.

Aldridge broke a 73-yard touchdown run with 2:25 to play in the half to bring the Bulldogs closer. After a Tate Gibbs pass to Weatherly for a two-point conversion, the Bulldogs only trailed 18-15.

Sweet Water held Luverne to a three-and-out, and on the Bulldogs next drive, Aldridge broke another long run, this time from 71 yards to put Sweet Water on top 22-18 going into halftime.

Aldridge scored from five yards out halfway through the third quarter to put Sweet Water on top 28-18.

Luverne scored on a pass from Womack to Marcel McMillian to make the score 28-24 with 10:35 remaining in the game.

Demarcus Gamble finished off the scoring in the game with a nine-yard touchdown run with 6:10 to play.

“We were just outcoached and outplayed tonight,” Luverne head coach Mike DuBose said. “We played hard, but we made some mistakes.”

The Bulldogs finished the game with 387 rushing yards and 399 total yards.

“We responded well to being down early,” Luker said. “We knew these kids were fighters, and they showed that tonight.”

The Bulldogs will host Washington County next Friday night in the state semifinals.