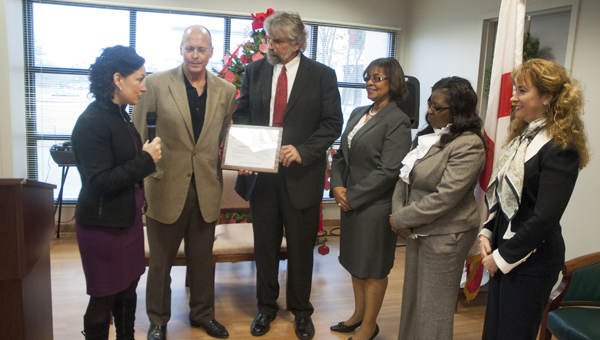 Along the way, they are able to offer patients free screenings for things like blood pressure, cholesterol, blood sugar and more.

Still, the most reassuring thing they can offer people concerned about their health is free too — just a simple conversation.

“People are hungry for conversation [about their health],” Gardner said during an special program Tuesday at the hospital.

The event celebrated a $900,000 grant that the USDA awarded to Tombigbee Healthcare Authority, which manages the hospital. The money will be used to expand mobile healthcare services in six west Alabama counties.

The visitors heard several people talk about how the grant and the “Healthcare on Wheels” initiative will benefit Demopolis and the surrounding area.

Marcia Pugh, the hospital’s director for grants, research and outreach, said the mobile unit’s goals are to increase outreach while also providing healthcare and related training in a rural setting.

Prevention was also a topic several people touched on Tuesday.

Loretta Wilson is the Healthcare on Wheels project manager. She said her father, mother and brother all died at home and questioned if one of them might have been helped had they had services like the mobile van offers.

“Someone might have been saved. Having access in our community can prevent those type of events,” Wilson said. “This is a dream come true.”

The trip was Kunesh’s first to Alabama since being named deputy under secretary.

She talked about the difference the mobile health unit will make in people’s lives.

“When I see healthcare facilities like this one and the reach of mobile healthcare, I really take heart.” Kunesh said. “You are going to have a big impact, a really wonderful impact.”

While things like screenings may be considered “primary” care, the medical services provided mean much more to people in rural areas, where transportation is an issue for many, she said.

The grant will be used to train nursing students who support “Healthcare on Wheels.” The mobile van works in Choctaw, Greene, Hale, Marengo, Sumter and Wilcox counties.

Tombigee Healtcare Authority received a $384,700 grant from USDA Rural Development in 2011 that was used to buy the customized van.