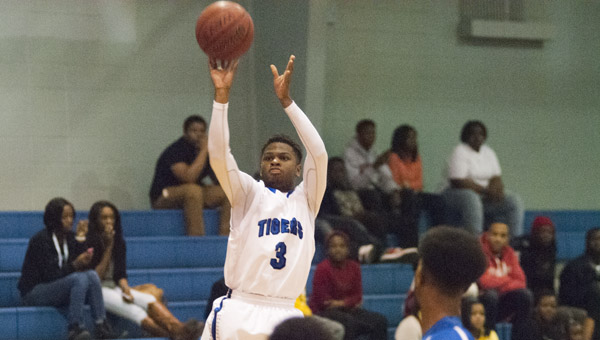 Kiante Jefferies takes a jumper against John Essex. Jefferies led the Tigers with 34 points in the win.

The Demopolis High School Christmas Tournament tipped off Thursday night with a game between Demopolis and John Essex.

John Essex gave the Tigers a scare in the game, taking it to double overtime before Demopolis pulled away to win 74-67.

Kiante Jefferies had a huge night for Demopolis with 34 points and 7 rebounds. The only other player to get into double figures for the Tigers was Charles Tripp who finished with 10.

“Kiante had a great night,” head coach Rodney Jackson said. “We would have been in trouble without him.”

Jefferies started the game shooting well from behind the arch with three three-pointers in the first quarter and one to open the second quarter. He had 15 points at halftime and Demopolis led the game 32-25.

John Essex kept hanging around and hitting shots when they needed to in order to stay in the game. After three quarters, the game was tied at 45, and neither team could put together a run to take a lead. 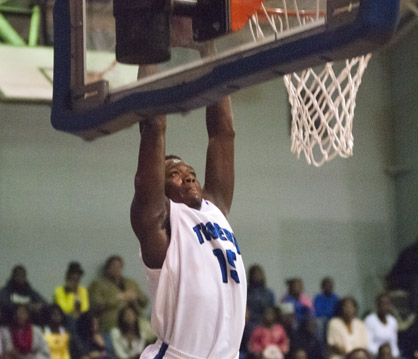 Cortez Lewis goes up for a dunk against John Essex.

Demopolis led by three with 25 seconds to play, but Michael Moore hit a three from the corner to tie the game at 54 with 14 seconds to go. Demopolis held until the last shot, but came up short.

In the first overtime, each team only made on shot from the field with the rest of the points coming at the free throw line. Once again, Demopolis missed a shot at the buzzer with the score tied, sending the game to a second overtime.

Fatigue began to play a factor with the Hornets, and the depth of Demopolis started to pay off. The Tigers were able to pull away thanks to some hustle plays and clutch free throws.

For John Essex, Michael Moore led the team with 28 points and 10 rebounds. His brother, Joshua Moore, had 20 points and 13 rebounds for the Hornets. Also in double figures was Anthony McIntosh with 10 points.

The win moves Demopolis to 5-5 on the season.

In the second game of the night, the Linden Patriots faced R.C. Hatch.

Hatch led throughout the game, and Linden was unable to make a run late in the game. 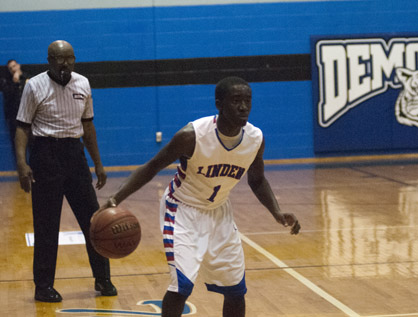 Dewayne Charleston brings the ball up the court for Linden against R.C. Hatch.

Imoras Agee was the leading scorer for the Patriots with 11 points, but he fouled out early in the fourth quarter.

Linden trailed 34-30 at halftime, but the Bobcats were able to stretch the lead in the second half before taking the win 72-55. The loss was the first of the season for Linden, and their record moves to 5-1.