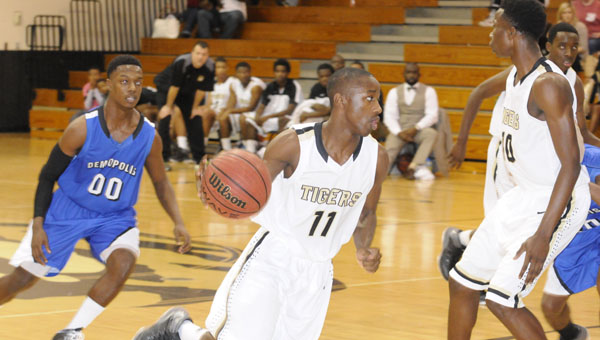 Despite an explosive start and late-game heroics from Kiante Jefferies, the Demopolis Tigers fell to the Greenville Tigers on the road Tuesday by a narrow margin of 62-58.

But it didn’t begin that way, as Demopolis found ways to punish a lax Greenville defense in transition for easy buckets as well as beyond the arch.

Greenville left the bench in the second quarter with a reinvigorated defense that harassed the Tigers into committing a number of crucial turnovers that chipped away at a healthy Demopolis lead.

The biggest momentum changer came when Greenville Tiger Zac Smith was fouled on what was very nearly a four-point play.

After sinking two foul shots and missing the third, a tip-in gave Greenville a four-point swing and the first lead since the game’s opening minutes.

Javarrius Cheatham ended the half with an exclamation point on a dunk that sent Greenville into the locker room with a two-point lead and all of the momentum.

The second half was déjà vu as the Greenville Tigers duplicated their success from the second quarter with a swarming press defense that forced bad decisions for Demopolis in much of the third and fourth quarters, extending their lead to as many as 10 points with only minutes remaining in the contest.

A series of hard attacks to the basket, led by Jefferies, gave Demopolis a number of trips to the free throw line that whittled down an unmanageable deficit to within three points with 17 seconds to go, but a last-minute Greenville steal at half-court on the Tigers’ final possession cut any chance for a miracle comeback short. The loss drops Demopolis to 0-3 in the area this season.

The Lady Tigers of Demopolis defeated Greenville 51-44 to improve to 2-1 in the area.

The Demopolis Tigers will host Hillcrest-Tuscaloosa Monday for the MLK Classic.