Windham named Rotarian of the Year

Windham, a native of Cullman, moved to Demopolis in 2002 when he purchased Holiday Cleaners. In August of 2004, he married former Carey Sittason of Decatur. 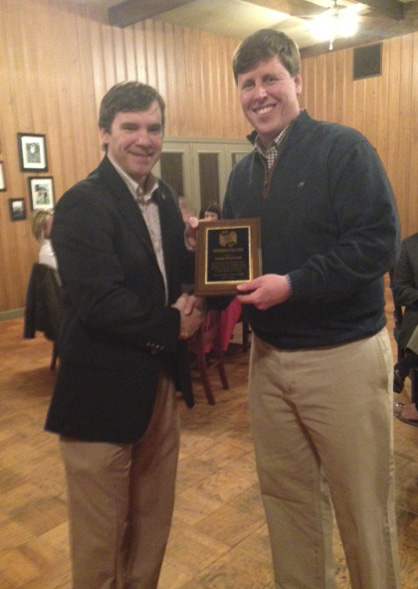 Jason Windham (right) was named Rotarian of the Year on Thursday during the club’s annual banquet. He is shown with Rotary Club President Rob Pearson.

In 2006, he and his family moved Holiday Cleaners to its current location on Highway 80, building and starting up Suds Laundromat and Batter Up Sports Grill at the same time.

Around this same time, Windham expanded the business, opening drop-off locations in Thomasville and Greensboro.

After joining Rotary in 2004, he has been active on the Golf Tournament Committee, helping to ensure the tournament has a full slate of sponsors.

During the fall of 2013, he hosted a night at Batter Up to support local schools and support organizations, and donated a total of approximately $2,500 to those local organizations.

He rallied fellow Rotarians and made a sizeable donation to the food pantry.

Windham is also a founding member of the Demopolis Area Business Council.