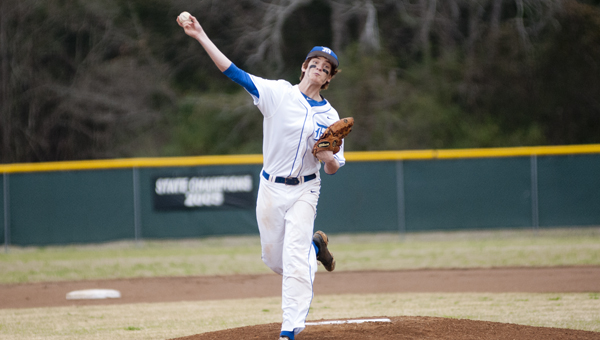 Tripp Perry started and got the win for Demopolis against Sweet Water on Monday night. He struck out seven and only allowed one run in five innings.

The Demopolis Tigers (3-2) earned their third win in a row Monday night with an 8-1 win over Sweet Water.

Tripp Perry started the game for Demopolis and pitched five innings, giving up only one run and two hits while striking out seven batters and walking none.

“Tripp commanded the strike zone tonight and he was keeping their hitters off balance,” DHS head coach James Moody said. “He had an outstanding performance tonight.”

Demopolis came out strong in the first inning and were able to get to Sweet Water starter Tristan Weatherly early.

Seth Aiken walked to lead off the bottom of the first and Michael Brooker singled to follow him. Matt Eicher knocked in Aiken with a single and Tyler Oates brought in Brooker with a groundout RBI. A double by Stephen Stewart scored Eicher to give Demopolis a 3-0 lead after the first inning.

Perry only faced 10 batters in the first three innings, and he struck out the side in the third inning. In the bottom of the third, the Tigers added another run on an RBI single by John Anthony Morrison that brought in Adam Sellers who was running for Jacob Rodrigues. 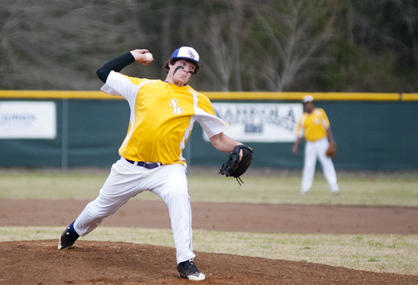 The Tigers stretched the lead to 8-0 in the fourth inning after getting to the Bulldogs pitching once again.

Brooker walked and then scored on an Eicher single, and Eicher was able to cross the plate on a throwing error following an Oates single. This brought about a pitching change for the Bulldogs, as they replaced Weatherly with Wynn Thompson. Thompson came in with the bases loaded, but walked both Wil Stephens and Ryan Schroeder, bringing in Oates and Rodrigues. The Bulldogs then brought in Will Huckabee to finish the inning.

The Bulldogs got their lone run in the top of the fifth on a throwing error by Stephens. Hunter Mendenhall scored on the play.

Stewart came into the game for Demopolis in the top of the sixth to finish out the game. He struck out four and gave up one walk and one hit in two innings pitched.

Sweet Water head coach Kevin Byrd said his team is young and they are still experimenting with lineups.

“We knew coming in we were a young team,” he said. “We’re still trying to figure out our lineups. We get into region play next week, so we’re trying different things this week to find what works.”

The Bulldogs will face Thomasville, Clarke County, Leroy and Washington County, all on the road, the rest of the week.

For Demopolis, they will face Thomasville on the road Friday night, and on Saturday they will go up against G.W. Long and Jackson in Jackson.

“We need to stay focused at the plate, on the mound and on defense,” Moody said. “We keep telling them that it’s a grind, and they should be mentally and physically exhausted after every game. I think we’re heading in the right direction with that.”