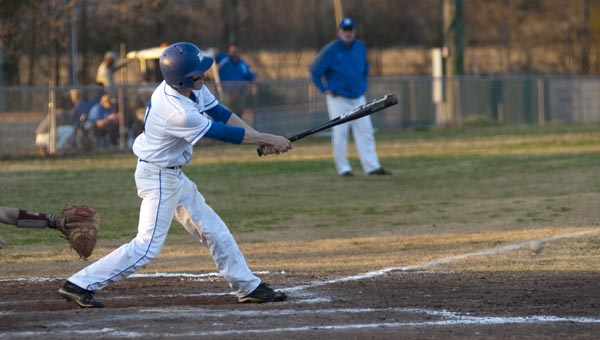 Seth Aiken hits a ground ball through the gap for Demopolis in their loss to Thomasville.

Demopolis dropped their fifth straight game Monday night in a 7-6 loss to Thomasville.

DHS led the game 6-2 going into the fifth inning, but Thomasville was able to come back and get the win.

“We couldn’t control their running game tonight,” head coach James Moody said. “If you give a team like that the opportunity, singles will turn into doubles and steals will add up. I’m disappointed that we couldn’t find a way to finish the game.”

Thomasville jumped out ahead 2-0 in the top of the first and Demopolis was able to get one run back in the bottom half of the inning on a RBI single by Michael Brooker that scored Matt Eicher.

The home Tigers took the lead in the third on runs scored by Eicher and Seth Aiken. Tyler Oates brought in Eicher and John Anthony Morrison brought Aiken across the plate. 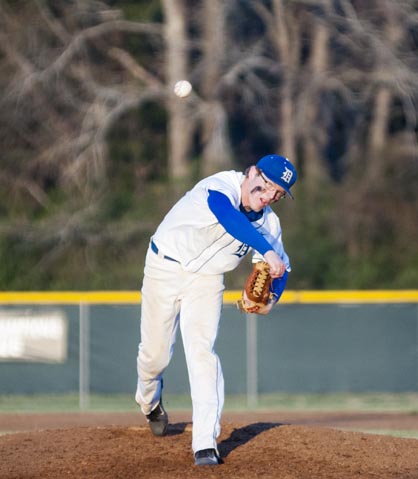 Michael Brooker started for Demopolis. He pitched five innings for the Tigers.

In the bottom of the fourth, Tripp Perry, Jacob Rodrigues and Wesley Dunn crossed the plate on RBI by Eicher, Oates and Morrison to give Demopolis a 6-2 lead.

Thomasville got two runs back in the fifth and three more in the sixth to take a 7-6 lead.

In the bottom of the seventh, Demopolis got the leadoff runner, Stephen Stewart, on base from an error by the Thomasville third baseman. Oates came to the plate with two outs and Stewart still on first, and reached on an error by the shortstop. Thomasville intentionally walked Brooker to bring up Morrison with the bases loaded, but he struck out to end the game.

“We got what we wanted in the seventh but we just couldn’t get it done,” Moody said. “I’ve got to credit Thomasville in the game. They never stopped doing what they do.”

Brooker started the game and pitched five innings, giving up four hits, two walks and four runs. He also struck out five batters. The loss was credited to Oates, who pitched two innings and walked one batter and gave up one hit and one run. He had two strikeouts.

The loss drops Demopolis to 4-8 overall. They will travel to Cordova on Friday.