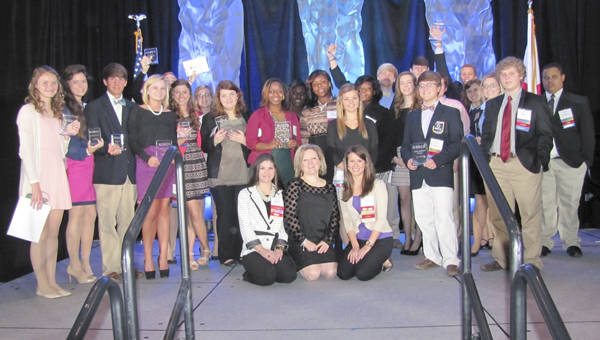 A group photo from CDC. Not pictured are Amanda Martinez and R.J. Cox.

The chapter as a whole was awarded the You Make The Difference award from the Muscular Dystrophy Association. They also were awarded the Gold Marketing Level for the State Recognition Project 2013-2014. Demopolis was the only chapter in the state to receive this recognition.

DHS chapter advisor Connie Davis was recognized as the state’s DECA Advisor of the Year. She also received recognition for serving as state officer advisor and was given a certificate for five years of service.

Demopolis had a group of 25 DECA students travel to Birmingham to compete during the CDC. Seventeen students will move on to complete in various categories at the national level in Atlanta on May 2-7. Fundraisers are going on now to help pay for student travel to Atlanta.

The chapter has also been recognized by national DECA as the largest in Alabama. For this achievement, DECA Inc. will host a Leadership Luncheon sponsored by the U.S. Army at the Georgia World Congress Center next month. Sponsors Courtney Taylor, Kelly Gandy and Davis will attend during nationals.