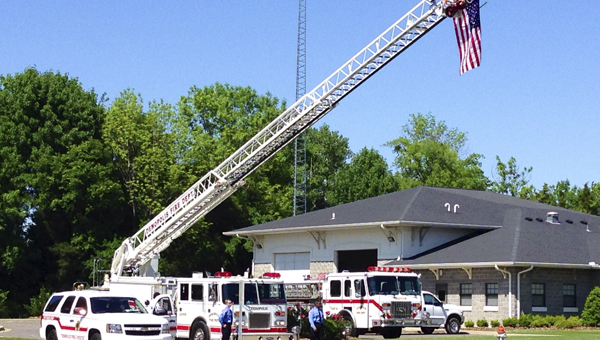 Former Demopolis Fire Chief Aubrey Randall, who led the city’s department for more than 30 years, was remembered Thursday for his love of family, dedication to the job and servant’s heart.

Randall started with the fire department in 1955. A few years later in 1958, he was named chief by then mayor Ed Bailey, a position he would hold until his retirement in 1990.

He hired current Demopolis Fire Chief Tommy Tate in 1990 — the two would work together for 11 months.

“I wish I could have been around longer,” Tate said. “He was a great chief. He was a people’s person. He is going to be missed.”

Early in his career, Tate remembers responding to a fire before he had completed rookie school, which meant he couldn’t enter the burning building. Instead, he stayed outside with Randall watching chief call the shots.

“He was a calm, cool leader. He didn’t get frazzled,” Tate said.

During Randall’s memorial service Thursday, Gallion Baptist Church pastor Hank Atchison said Randall and his wife Ruth were among the first people to welcome the new preacher and his family to town four years ago.

“Mr. Aubrey has impacted many, many lives, including mine,” Atchison said. “He loved people. Mr. Aubrey gave everyone a chance.”

“He loved the men he supervised at the Demopolis Fire Department. The legacy he left behind there may not be matched by anyone … if they do, it’s probably because he trained them,” Atchison said.

After his first retirement from the fire department, Randall stayed at home a month, but soon went to work at Walmart and later joined the hospital’s Auxiliary.

He was a member of Gallion Baptist Church for 56 years and volunteered in the nursery for almost two decades.

“There’s no doubt — Mr. Aubrey was Demopolis through and through,” Atchison said. “What a servant’s heart Mr. Aubrey had.”

Randall was born Oct. 21, 1928, in Demopolis to the late Leon Eugene Randall and Maggie Overstreet Randall. In addition to wife Ruth and two sons, Randall is survived by nine grandchildren and six great-grandchildren.