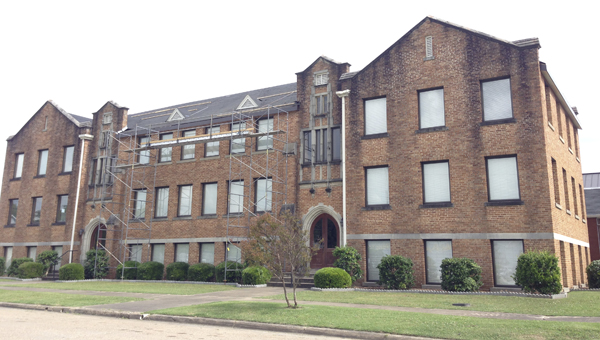 Demopolis First United Methodist Church is in the process of having the roof of the education facility replaced, and there are plans to replace the sanctuary air conditioner and build a parsonage in the near future.

Over the last few weeks, Demopolis First United Methodist Church has been undergoing some renovations.

The roof on the education facility is in the process of being replaced, and Pastor David Willis said there are plans for more work in the near future.

He said the current shingle roof is being replaced with a metal roof.

“The current roof really outlived its’ life expectancy,” he said. “It was time to make the change, and so we’re replacing it with a metal roof to get everything to match.”

He said this project should be finished by around the third week in June.

“It won’t interfere with Vacation Bible School on June 16-20,” he said.

Willis added that the church will also start a couple new projects in the coming months as well.

“In the near future, we’ll be replacing the air conditioner in the sanctuary, and we’ll be building a parsonage,” he said.

He said the parsonage will be important for the church’s future.

“In the United Methodist Church, the pastor moves at the discretion of the bishop,” he said. “We wanted to build a place where the pastor and his or her family can feel at home. I believe it’s expedient to have a place they can feel at home when they move to Demopolis.”

The church is paying for the upgrades and renovations through its building fund.