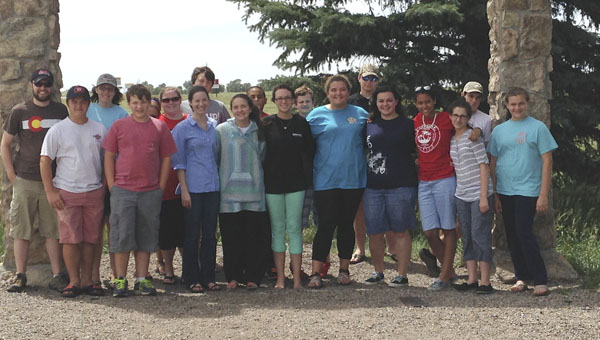 A group of 22 people from Fairhaven Baptist Church traveled to Lowry, Colo., in June to help plant a church with former Fairhaven pastor Eric Sanford.

Fairhaven Baptist Church’s Youth Ministry went on a mission trip in late June to Colorado to help plant a church.

A group of 22 from the Demopolis church traveled to Lowry, Colo., which is in southeast Denver, to help former Fairhaven pastor Eric Sanford with a new endeavor, planting Journeyman Church.

Gresham said the goal of the trip was to help Eric and Amanda Sanford get to where they can hold public meetings.

“We threw a block party while we were there and were able to meet several non-Christians that were interested in the faith,” Gresham said.

Gresham said he felt like Fairhaven’s group accomplished what they set out to do on the mission trip.

“We were there to provide an opportunity for Eric to be able to meet more people,” Gresham said. “During the block party, we saw one 9-year-old profess Christ, and that was really cool to see. Hopefully we were able to make more opportunities for them to meet people and disciple to their neighbors.”

“One difficulty for us is that according to our faith, we have to be proactive to share the gospel with others,” he said. “A lot of people we talked to didn’t want to hear what we had to say, so we had to respect that. There were two ideologies combating, and we tried to find a balance so we could speak with people.”

Another difficulty the group faced was that their bus had problems on the return trip to Demopolis. Gresham said the bus broke down near Macon, Miss., on the way back.

“It made it 25 of the 27 hours,” he said. “We had problems with it when we got there, and it was in the shop the whole week we were there. God was good to get us back to where we got, because if it broke down in the middle of Kansas or somewhere, we might have had more trouble.”

Gresham added that he felt the trip was a good experience for the 15 youth, as well as the five adults and two college students that went.

“Most everyone in the group had never been involved in a church planting,” he said. “It’s not something we see a lot of in the South because we have so many churches. I believe helping start a church from the ground up was helpful for us to see what it takes. Now we need to figure out how we can get back to those basic principles at home. The way churches grow is through evangelism, and that’s something we’re bad at at home. We get ‘highway hypnosis’ and only focus on ourselves instead of what God is doing around us. People have to come to know Jesus for a church to grow.”

Gresham said Journeyman Church will start out from the Sanford’s town home.

“Their goal is to eventually be able to have a campus in Lowry, but land out there is very expensive, and there isn’t much land available anyway. There is a chapel where the Air Force base used to be, but it’s mainly used for social events. They may be able to rent it for services in the future, but right now, they’re just trying to bring people together.”