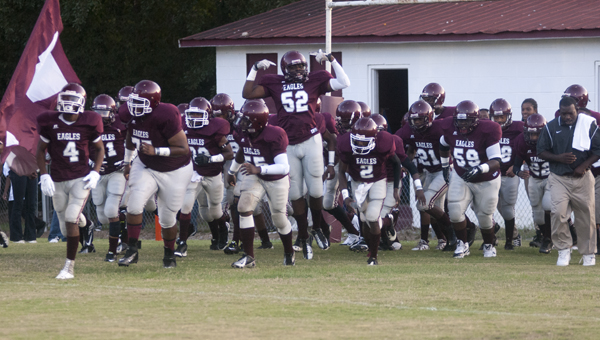 The A.L. Johnson Eagles take the field for the first time in 2014 under new head coach Johnney Ford.

The A.L. Johnson Eagles opened the Johnney Ford era and the 2014 regular season with a win Friday night over rival R.C. Hatch.

Ford said he was proud of the way his team battled through the heat and humidity in their 36-16 win.

“Rivalry games are always tough, and when you add in these elements with the humidity, it makes for a really rough night,” he said. “I feel like we did a great job overall tonight.”

The Eagles had to overcome four turnovers in the game to get the win over the Bobcats. With a talented West Blocton team coming to Thomaston next Friday, Ford said he’s looking for his players to be more focused. 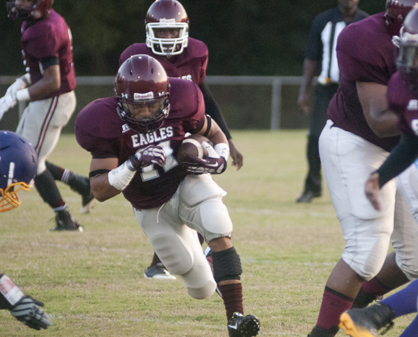 Mike Croom runs the ball for the Eagles.

“I liked our effort tonight, but next week will be a test,” he said. “We’ll need to be more focused. We need to work on our timing this week, but I like where we are. I think we’re going to be fine.”

A.L. Johnson drove down inside the Bobcats’ red zone on their first offensive possession, but a fumble ended the drive abruptly before they could score.

On R.C. Hatch’s next possession, quarterback Stanley Green was picked off by ALJ’s Jeremy Mitchell for a touchdown to put ALJ on top 6-0 after a missed extra point.

Early in the second quarter, the Eagles were driving again when a Zynell McGhee pass was intercepted by Daronte Ward of R.C. Hatch. 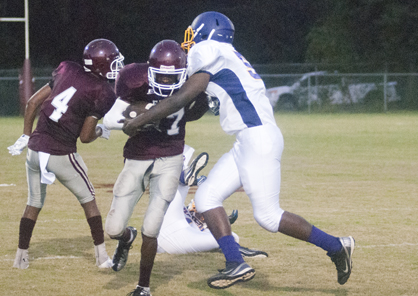 Warren Boykin tries to shake off a tackler.

The Bobcats drove down the field and capped off the drive with a 10-yard touchdown run by Kaleel Dunlap. Ricky Clark Jr. ran in the two-point conversion to give the Bobcats an 8-6 lead.

Desmond Mair returned the ensuing kickoff 50 yards down to R.C. Hatch’s 25 yard line, then Mike Croom took a carry 25 yards for a score. A missed two-point conversion put ALJ on top 12-8 late in the second quarter. The score held until halftime.

The second half started out slow for both teams, but ALJ was able to capitalize on a poor punt by R.C. Hatch. Mair took a punt return 38 yards for a touchdown to put ALJ on top 20-8 after McGhee found Charles Edwards on the two-point conversion attempt.

Early in the fourth quarter, the Bobcats pulled within four points after Green found La’Darius Morrissette for a 26-yard touchdown pass. The play was set up by a McGhee fumble and a recovery by R.C. Hatch’s Quinterious Sullivan. Ward ran in the two-point conversion for the Bobcats to make the score 20-16.

Later in the fourth, McGhee found Warren Boykin for a 60-yard TD pass the sealed the game for the Eagles. McGhee ran in the two-point conversion himself to put the Eagles on top 28-16.

ALJ added one more touchdown with a minute to play on a 12-yard run by Dyshaun Thrash.

McGhee found Lewis Anderson in the endzone for the two-point conversion to make the final score 36-16.

“It feels great to get that first win out of the way,” Ford said. “We were blessed to get some of the breaks we did, but sometimes when you win, it isn’t necessarily pretty.”

The Eagles will host West Blocton next week in their second game of the season.