Demopolis is a community that stands behind its own, and this week, people have been doing just that.

After Demopolis High School sophomore Jacob Browder was injured in a bull riding accident Saturday, there has been an outpouring of support for him.

Jacob, the son of Susan and Nicky Browder, is being hospitalized at Children’s of Alabama in Birmingham. He suffered a severe head injury in the accident. 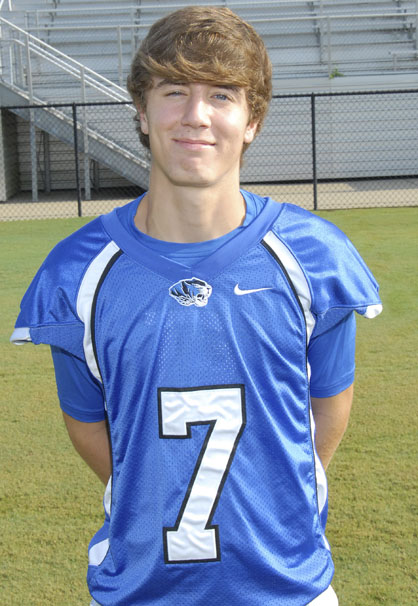 Jacob Browder is a member of the Demopolis High School football team.

Doctors have kept him in a coma since the accident, but his family said they are starting to move forward with the recovery process.

Schools from across the area, including Demopolis, Marengo Academy and Hale County schools, have gathered at flagpoles in prayer for him since the accident. DHS principal Tony Speegle said his students have really rallied together behind Jacob.

“It’s been a very somber week,” he said. “It’s obvious that he’s on the minds of everyone in the school. They’re constantly checking for updates on his status, and we’re trying to keep them informed when we can. The students want to do the little things to help, like gathering at the flagpole and breaking off into smaller groups to pray.”

Speegle added that the student body signed a large card to send to Jacob and are going to be selling T-shirts and horseshoe tattoos at Friday night’s football game to raise money for Jacob and the Browder family.

“I think it speaks volumes for our community and the family atmosphere that we have here,” Speegle added. “The students realize he’s a classmate, and it’s like he’s a family member. Demopolis is a good, family-oriented city, and the people here protect their own when they get hurt.”

Jacob is a member of DHS’ football team and tennis team as well, and head football coach Tom Causey said not having him around this week has been hard for the team.

“He’s a great kid and a great teammate,” Causey said. “The players love and respect him, and it’s hurt them this week with him being gone. Not being able to see him and talk to him has been hard. He’s on their minds and in their hearts.”

Causey added that when a team is faced with adversity, they can either pull closer together or separate.

“The guys understand that it’s a part of life, and the best thing we can do is pull together,” he said. “It helps to close ranks when something happens, and I think that’s what our guys have done.”

Family and friends have set up the Jacob Browder Fund at Robertson Bank, Tuscaloosa Teachers Credit Union and the Bank of Moundville to help with post-care expenses. If such care isn’t needed, money given to the funds will be donated to a charity of Jacob’s choice.